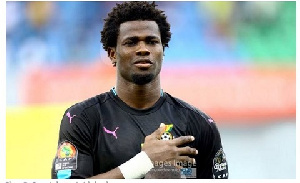 Black Stars goalkeeper, Razak Brimah, has said he would do better than all four goalkeepers named in Ghana’s squad for the 2023 AFCON qualifiers.

Brimah claims he had a better season and therefore his name should have been on the list.

Speaking on a Twitter space hosted by Sports Journalist Alexander Anyankwaa, Razak Brimah said he would have started all upcoming Black Stars matches if he was included in the squad.

“With all due respect, I can do much better than them. I respect them a lot but in terms of quality? I should be part and I will play all the games with all due respect to my teammates and my colleague goalkeepers. Those who follow me at my club side and know me from my time at the Black Stars and also understand football know that I’m 100%(good). I’m not bragging but I know what I can do and those that know football, know 100%,” he said.

In 2017, Razak Brimah used some unfortunate words on Ghanaians, using the ‘F’ word when he was criticised for his poor performance at the AFCON.

Despite apologising, the shot-stopper feels the national team handlers still hold his actions against him.

“The problem at the Black Stars is that we do not do the right thing and we always look for excuses. In football, there are no excuses. (But) It’s like we are always waiting for something to happen to take advantage of it. Fine, it happened and I’ve apologised and I’m sure most Ghanaians I would say 80% or 90% have forgiven me. I’m playing my league and I’m doing my best. I was in top form and all that but the GFA or no one said anything,” he added.

Previous VIDEO: Odartey Lamptey weeps as he talks about his new wife on live TV
Next What Sam George said about Afia Schwarzenegger’s ‘barren’ post that got her mad