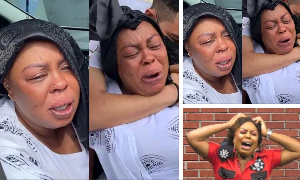 After her 10 days in jail, Afia Schwarzenegger took a shot at Ghanaians in a post that has since been taken down.

Afia Schwar said that everyone in the country is against her just because she lives her life.

Afia says that everyone in Ghana hates the same woman, who is a single mother.

She then quoted Exodus 14:14, saying that her fight was now in God’s hands.

The fact that Afia Schwarzenegger deleted the post after a short time is interesting.

The socialite who has been in a lot of trouble couldn’t afford to look for more trouble while she was supposed to be in jail for 10 days.

In a case between Chairman Wontumi, Afia Schwarzenegger, McBrown, Fadda Dickson, A Plus, and Mr. Logic, the Tema High Court gave her 10 days in prison and a GHC 60,000 fine.

Reports say that Fadda Dickson was released and found not guilty because he showed regret before the trial. However, the rest of the defendants were all given a GHC 60,000 fine each.

Nana Ama McBrown, who was in charge of the show, gave Afia Schwarzenegger a chance to explain, and in the process, she spread more lies about Chairman Wontumi. The case was already in court.

So, McBrown, the other people on her panel, and the people in charge of UTV were all sued for contempt.

Previous School Principal stabs a man to death after catching him in his former girlfriend’s house
Next Story of an African slave, Sara Baartman who was used as a circus animal in Europe