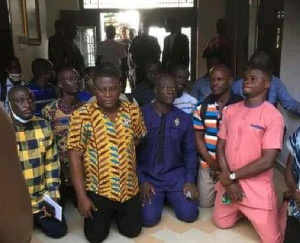 The Juaben Traditional Council has denied reports that Juabenhene, Nana Otuo Siriboe, forced some assembly members to kneel before him as a sign of remorse for voting against the president’s MCE nominee for the area.

Following the circulation of pictures of the assembly members kneeling at the Juabehene’s palace on the internet, which started around Sunday, the Juaben Traditional Council through its Registrar, Kwaku Ankomah, has clarified the matter.

According to a Daily Guide report sighted by GhanaWeb, the registrar in a release describes reports of the Omahene forcing the assembly members to kneel as “vicious lies and propaganda” circulated on social media to tarnish the image of their chief.

In a statement, the Jauben Council notes that the Presiding Member of the Juaben Municipal Assembly in the person of Joseph Asare and three other members of the Assembly on Thursday, October 14, 2021, came on their own free will and accord to see the Omanhene and pleaded with him to help resolve differences between members of the assembly and the president’s nominee for the MCE.

“Under this plea, the Omanhene convened a meeting of the Assembly Members and the Nominee on Tuesday 19th October at the Palace. At the meeting which lasted more than three hours, the Assembly Members were allowed to express whatever misgivings they had towards the nominee.”

“When the issues were put before the nominee, he apologized to the Members for any shortcomings on his part”, the statement said.

It added that “His apology was duly accepted by the Members. Nana thereafter reconciled the two parties. Both parties expressed their profound appreciation for the Omanhene’s timely intervention and his tact in reconciling them.”

According to the statement, the Omanhene after his mediation received notification on Friday, October 29, that the assembly members had gone to hold a press conference on issues relating to the confirmation the Municipal Chief Executive (MCE) nominee.

“The Omanhene, therefore, invited them to the Palace and sought to know what had prompted the holding of a press conference since they had initially referred the matter on the confirmation of the MCE to him and he had effectively dealt with it. He had hoped that any extenuating issues would have been first referred to him,” the statement explained further.

The assembly members were then said to have admitted to making a mistake by reigniting matters concerning the MCE’s confirmation and pleaded for the forgiveness of the Juabenhene through his Gyasehene.

The Gyasehene who accepted to intercede on behalf of the assembly members advised that they kneel before the Omanhene as a sign of their utmost remorse over their actions.

“They duly complied with this advice. At no point was any Assembly Member forced to kneel for voting against the Nominee”, it explained.

“After all the Omanhene had no mechanism to know how members voted,” the statement added.

Meanwhile, in a latest development, JoyNews is reporting that the Juaben assembly members have refused to participate in an election to confirm the MCE nominee for the area, Sarfo Kantanka.

The intervention of the Juaben Traditional Council is said to have failed to yield results as some twenty of the total 26 assembly members are reported to have boycotted an exercise to conduct an election on the MCEs nomination on Monday, November 1, 2021.

The assembly members are said to be protesting the deployment of heavy police and military to the Juaben area ahead of the exercise.