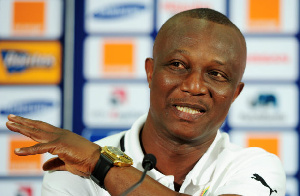 The dismissal came months after Ghana’s disastrous showing at the 2014 World Cup where the team picked just one point from a possible nine.

The Sports Minister then, Mahama Ayariga has recounted a series of incidents that led to the sacking of Kwasi Appiah.

According to him the FA did not set out to dismiss Kwasi Appiah but rather wanted to hire a technical director to help him.

It was the opinion of the GFA President then that Kwasi Appiah was lacking when it comes to the tactical aspect of football.

The FA and the Ministry thus agreed to ‘buy’ a tactical expert to enable Kwasi Appiah win the 2015 AFCON for Ghana.

Kwasi Appiah was duly informed about the arrangement but was unhappy with the decision by the FA and Ministry to recruit an expert.

An unhappy gave substance to media reports about the decision when he granted an interview to a Kumasi-based radio where he disclosed his aversion to a Technical Director.

The FA and Ministry were thus left with no option than to sack him and engage a new coach ahead of the 2015 Africa Cup of Nations.