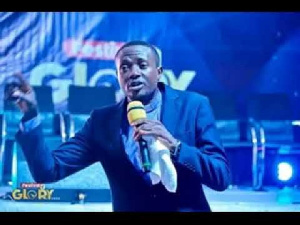 A Nigerian cleric, Apostle Tony Akor has stated that the reason why some women are still unmarried is because the men that come their way are very poor.

He said this while preaching to his congregation.

According to Apostle Tony, when the ladies get proposals from the poor men, they do not tell them directly that they do not want them because they are poor. They rather deceive them by saying that they will pray about it.

“Why is it that some sisters are not yet married? Is it not because they are afraid of suffering? Is that not why? That’s just the truth. They are praying and claiming that they want to hear God.

“But now because he is poor, everybody is praying. Everybody is saying, ‘Give me time, give me time'” he said.

Tags ‘Apostle’ Akorreveals MARRIED not TONY Why some ladies are yet