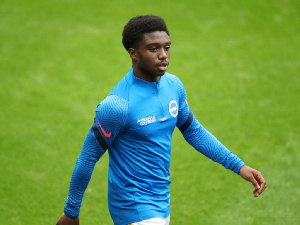 Why Tariq Lamptey is not a guaranteed starter for Black Stars

The Black Stars squad is taking shape for the 2022 FIFA World Cup in Qatar as Otto Addo look to put together a competent team for the tournament.

The Ghana Football Association is doing everything possible to lure top Ghanaian players born abroad to join the squad for the competition.

The British-born Ghanaian has reportedly completed his nationality switch and thus will be available for the next call-ups.

Lamptey is already in Ghana. He attended the Black Stars’ 2023 Africa Cup of Nations qualifiers against Madagascar in Cape Coast on June 1, 2022.

The 21-year-old is undoubtedly a top full-back who has proven himself to be one of the very best right-backs in the English Premier League over the past two seasons.

Despite the hype around him he will not walk straight into the right-back position of the Black Stars but would have to fight for it.

Currently, Dennis Odoi is the first pick for the position. He has owned the position with just three games.

The 31-year-old made his debut against Nigeria in the World Cup playoffs. He is one of the reasons Ghana secured the qualification.

His awareness, how he defends in a one-vs-one situation, his offensive abilities, and on top of it all the commitment and zeal he adds to his game has made him every Ghanaian’s favourite for the position.

There is no way to get past Dennis Odoi at the right side and he showed it over the two-legged game against Nigeria in March 2022.

He nullified the threat of Victor Osimhen in the first leg. In the second leg, after struggling in the early minutes against Ademola Lookman, he came good and shut the Leicester City forward.

Odoi was nothing but brilliant to the extent that he played as a left-back at some point in the second leg against Nigeria and delivered.

The Club Brugge defender was at his best yet again in Ghana’s 3-0 win over Madagascar. He created the first goal through his pressing.

Thankfully, Tariq was present during the Malagasy game to witness the Odoi show. Certainly, he would know that the position is not an easy grab.

A selection headache awaits Otto Addo and his technical team with regard to the right-back position.

Previous PHOTOS: Fire tender involved in fatal accident; 6 personnel in critical condition
Next Businessman who attempted to use daughter for money ritual remanded