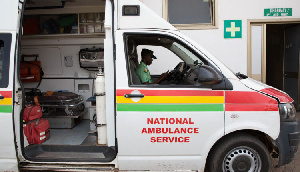 A resident of Sekondi-Takoradi, John Obiri Yeboah, has accused some personnel of the National Ambulance Service of unprofessionalism leading to the death of his wife.

According to a report by Skyypowerfm.com sighted by GhanaWeb, the husband of the deceased is accusing the Ambulance Service officials of demanding an amount of GH¢600 before transporting his wife to the Korle Bu Teaching Hospital when she had an emergency.

Mr Yeboah noted in an interview with Skyypower FM that his pregnant wife who was due for delivery was asked to report at the Fijai Holy Child Hospital where she was scheduled to undergo a caesarean section on Monday, January 3, 2021.

According to Mr Yeboah, his wife successfully underwent surgery early in the morning on January 4, 2021. He said he left the hospital to go and prepare food for his wife at home and while he was home, he received a call from his wife’s sister informing him that she had suffered a complication and was to be transferred to the Korle Bu Teaching Hospital in Accra.

“On my way going to the hospital, I had a call from the Ghana Ambulance Service alerting me to meet them at a particular junction.”

“I met them with my wife and her sister in the vehicle and right at that moment, they demanded GH¢600, giving an excuse that there is no fuel in the vehicle to transport my wife to Accra. I was a bit confused because I had not prepared and thought it would rather be included in my final bill.

“I did not have enough money which I told the ambulance team, they moved some distance but stopped at a filling station in Assorko Essaman, emphasizing there is no fuel and cannot go further. We spent some moments there so I had to find GH¢50 for fuel but the driver rather moved back to the hospital which a heated argument ensued between them and the hospital staff,” he stated in the radio interview.

The bereaved husband said the argument with the Ambulance team continued for a while until the medical team at the Fijai Holy Child Hospital came up with the amount being demanded.

“The driver told me to wait at the hospital whiles he goes to buy the fuel after which we will continue our journey to Accra, during that moment my wife was still in the vehicle,” he added.

The journey to Accra finally began after the Ambulance returned from the filling station however while on their way, Mr Yebaoh said his wife’s condition worsened and it was suggested that she be sent to the Cape Coast Hospital for emergency care.

“I was confused at first, but the moment we got to the Cape Coast Hospital, my wife had died,” he added.

According to the bereaved husband, the delay over the GH¢600 led to the death of his wife.

The status of the baby however was not reported.