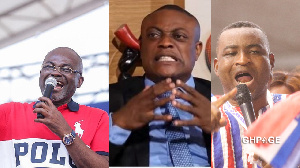 Private legal practitioner, Maurice Ampaw, has descended on the Member of Parliament for Assin North, Kennedy Ohene Agyapong over his recent statement about the Ashanti Regional Chairman of the NPP, Bernard Antwi Boasiako (Wontumi).

Kennedy Agyapong speaking to journalists at the NPP’s National Delegates Conference slammed Chairman Wontumi for openly campaigning for some candidates in the party’s national executives election held on Saturday.

According to him, Kennedy Agyapong who has announced his intent to contest the NPP’s flagbearer position is rather seeking to make himself lord over the NPP.

“You are telling delegates that if they don’t vote for you no member of the party can win presidential power. This is the greatest insult to the party. But you see it as a crime that Wontumi and the other regional chairmen supported John Boadu, mere support. You claim they are arrogant and disrespectful but you have the guts to tell delegates that if it’s not Kennedy Agyapong they should forget about retaining power,” he fumed on his show on Wontumi TV.

According to Maurice Ampaw, Kennedy Agyapong has arrogated himself undue power in the party which threatens anyone he disfavours in the NPP.

He questioned the contribution of the MP who describes himself as an NPP financier.

“We should not allow a person in the party to feel what they say is final. Kennedy Agyapong is always issuing threats to either make someone lose or win an election. He threatened Jake (Obitsebi Lamptey) until he died. He brought it on Jonh Boadu, whoever Kennedy Agyapong disagrees with he will seek their removal.

“What is your contribution, Kennedy Agyapong contributes and makes a public show of it but people do more and don’t talk about it. You give people GHC2 and GHC5 and come out to make noise about it. Do you know much Kufuor, Nana Addo, Ofori Atta and the rest have contributed to the NPP? Do you know how much Wontumi has contributed? Is it not just an MP that you have attained? Your only achievement is being an MP. All your life achievement is being an MP from Assin Fosu, even on the floor of parliament, you don’t talk. You’ve never been a minister, CEO, or public officer apart from being an MP.

“You are not Chairman Wontumi’s mate when it comes to politics because, at a younger age, he has been a constituency chairman for two terms and has risen to become a regional chairman for three terms. He has single-handedly footed the bill of the party. Wontumi supports MPs with his own money. When he was contesting regional chairman, you wanted to give him money but he rejected it because you talk too much,” he alleged.

Kennedy Agyapong speaking to the media at the NPP’s National Delegates Conference warned Wontumi to “cool down” emphasizing that the Ashanti regional chairman does not own the party.

Chairman Wontumi and other 15 regional chairmen openly declare support for a candidate during the just-ended national executive conference at the Accra Sports Stadium.

To him, Wontwumi was “whipping all [regional] chairmen to raise their hands reluctantly. All of them have been embarrassed. If it had been anywhere, all the chairmen would resign.”

Kennedy Agyapong noted that he has learnt his lesson which is why he decided not to support any candidate because openly supporting a candidate leads to disunity.

“To get unity in the party, I’m not openly going to support anybody; if you are good and the people believed in your work, they will vote for you.

“For the first time in the history of the NPP, you will see 15 chairmen raising their hands because they have been whipped. They’ve been disgraced. They should go and sleep and learn sense. But if you are a party chairman and you starve your people underground there, you cannot change their minds,” Kennedy Agyapong stressed.

Previous TESCON suspends all activities to protest disrespect at NPP’s conference
Next Omo Baba Olowo: The genesis of Davido’s greatness