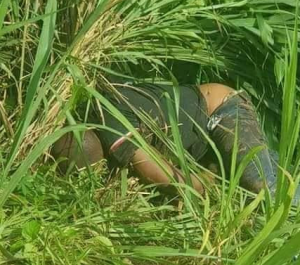 Amey Kwame, a 27-year-old man has been butchered to death at Akyem Dadatsunya, a farming Community near Begoro in the Eastern Region.

The body of the deceased Amey Kwame Albert has been deposited at the Begoro Government Hospital.

According to the local Police, one Tetteh Laweh a resident reported to the Police that, the deceased was found in a pool of blood near a riverside with multiple cutlass wounds on his body but before his passing, he revealed that his assailant Angmor Teye attacked him with a cutlass after a short misunderstanding.

The deceased died shortly after arrival at the Begoro Government Hospital.

The Suspect has been arrested by the Police. The cutlass has been retrieved as an exhibit.