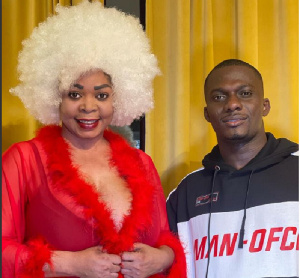 In the said picture, Joyce was captured in a red lingerie robe with a black bodysuit which exposed her cleavage.

After the photo found its way on social media, many have teased the blogger of having the intention to add Joyce Dzizor to his tall list of women.

As part of the concern, others warned Zionfelix to be mindful of his sexual urge as far as that particular woman is concerned.

This is because, in an earlier development, Joyce Dzidzor publicly announced she had tested positive for HIV.

But Zionfelix who appears to have visited Joyce Mensah in Germany purposely for an interview shared the said picture with a caption;

“First time meeting her and I have a lot to ask. It’s about to go down right now in Hamburg”

Read the reactions from social media below