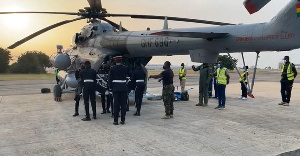 The Inspector-General of Police, Dr George Akuffo Dampare, has received the mortal remains of two gallant police officers who were killed by suspected armed robbers while on patrol duties at Zuarungu in Upper East region.

News of the incident broke on Wednesday December 15 2021, when the Police in a statement narrated robbers shot at the tank of the police motorbike and partially burnt General Constable Mohammed Adam Suley while General Constable Emmanuel Akowuah was shot in the head.

The remains of the slain officers who serving at the Police Public Safety Training School were airlifted from the Police Hospital at Pwalugu, in the Upper East Region.

The remains were covered with the official flag of the Ghana Police Service and led through a brief procession with officials and family of the deceased officers marching slowly behind.

Meanwhile, the Police has commenced anti-robbery and intelligence-based operations at Zuarungu in the Upper East Region.

The move is aimed at apprehending some three suspected robbers who killed the two officers on patrol duties.

The IGP, Dr. George Akuffo Dampare has already placed GH¢50,000 bounty on the head of the suspected robbers.

He also assured residents of Pwalugu of the Police’s resolve to apprehend all criminals and wrong activities in the area.

Watch the brief ceremony below:

Source: www.ghanaweb.com
Related Topics:KILLINGpoliceZuarangu
Up Next