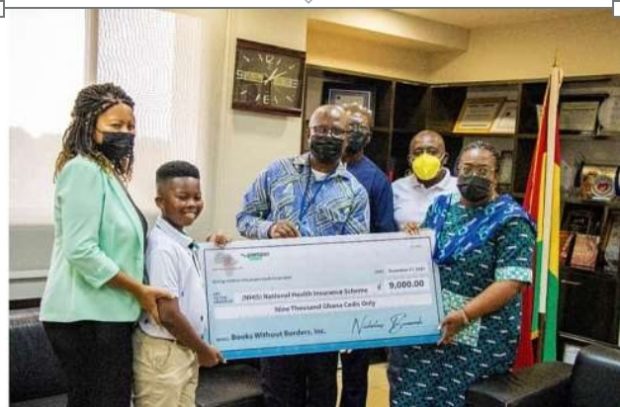 The 10-year-old boy Master Nicholas Buamah made the presentation at the headquarters of the NHIA in Accra.

In an interview, he told ModernGhana News that he is always concerned about the healthcare of children and therefore decided on his own, to raise money on YouTube Channel to help the course.

The CEO of the NHIA, Dr. Lydia Dsane-Selby, the Deputy CEO incharge of Finance & Investment, Mr. Francis Owusu and the Board Chairman, Dr. Ernest K. P. Kwarko received the donation on behalf of the Authority.

Dr. Lydia Dsane-Selby thanked the young man for his kind gesture and assured him of registering the children onto the Scheme.

She added that the amount donated will cater for about 1,500 children, which she said was a significant number of children to be registered and renewed onto the Scheme.

Nicholas Buamah is a published author, philanthropist and also the founder of Books without Borders, a nonprofit organization.

Nicholas has worked on several charitable projects in Ghana and now the ambassador for the Kids Department at Opemsuo Radio (104.7 FM), which is Ashanti Broadcasting Corporation, owned by His Royal Majesty Otumfuo Osei Tutu II (Asantehene).