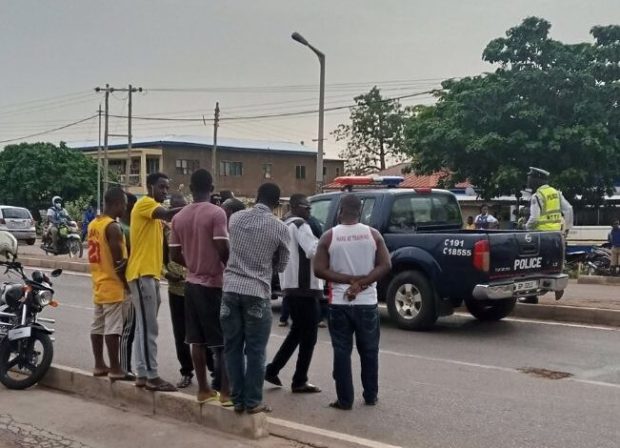 About 17 police officers from the Eastern Regional Police Headquarters have been involved in a near-fatal accident on the Apirede Akuapem to Somanya road.

Three of the officers in critical condition have been rushed to the Eastern Regional Hospital while the remaining are receiving treatment at Atua Government Hospital.

The police officers were aboard a Mercedes Sprinter bus from Koforidua to Somanya for an official duty however on reaching a section of the road the driver allegedly failed to break while descending a hill losing control of the steering wheel. The vehicle crashed into the bush.

Many of the injured police personnel were rushed to the Atua Government Hospital even though the accident occurred very close to the newly built Somanya District Hospital which remains closed despite being handed over for operationalization.

Three of the police officers were referred to Eastern Regional Hospital for emergency intensive care due to the severity of their conditions.

The Public Relations Officer of the Eastern Regional Police Command DSP Ebenezer Tetteh told Starr news when contacted that “indeed, on 27th November at about 06:30hours Police Woman Gladys Paddy in charge 17 men from the Eastern Regional Police Command onboard Mercedes Benz sprinter bus with registration number 6780-20 driven by Kofi Asare from Koforidua to Somanya on official duty on reaching a section of the road between Apirede and Somanya the Suspect driver allegedly failed break whilst descending the Apirede hills resulting in an accident ”

He continued “the persons on board the vehicle sustained various degrees of injuries were rushed to Atua Government Hospital in Somanya for treatment. Three of them meanwhile have been referred to the Eastern Regional Hospital for further treatment because of the extend of their injuries The are responding to treatment at Atua government hospital”.

The Relationship Between LGBTQ Inclusion and Economic Development