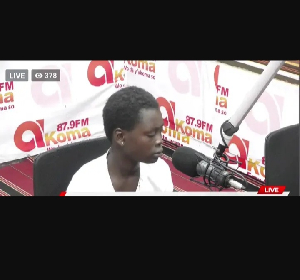 One evening, she sent food to her brother, on her way back home she met Owura and his best friend Kwabena. Owura proposed to her and promised to take care of her and also sent her to Kumasi to stay with him. She too accepted his proposal because of the promise he gave her. The following day she travelled to Kumasi with her boyfriend and spent three days with him before coming back to her hometown.

Months later her Auntie found out that she is pregnant, she tried to call Owura to inform him but his phone was switched and couldn’t reach him. Matilda said Kwabena admitted to take care of her and also slept with her on several occasions whilst she is pregnant with his best friend, he too went back to Kumasi within a few months without giving her any money.

Few weeks later a woman called Madam Kate came to her Auntie’s house, the woman had sympathy for her so she decided to take care of her but after she gave birth, the child got Jaundice.That woman paid all her hospital bills but she told her that she can’t continue to stay with her anymore because she has no money again.

Matilda said she went to stay with her mother for a while but she didn’t get any good treatment from them. She later came back to Madam Kate’s house but she didn’t provide her with any food, she has to go to work with her Auntie to get food before she will come home in the evening. Matilda said the woman recently told her to packed out of her house, she too has no where to go.