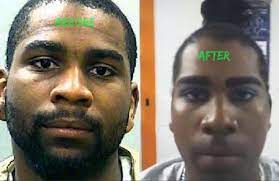 A transgender prisoner who got two fellow inmates pregnant at an all-women’s prison In New Jersey has been moved to a new facility to be with male prisoners.

The lady who was born a man has been incarcerated for 30 years for killing her former foster father to death.

Minor, 27, complains that she was misgendered and abused by guards during the transfer and was even placed on suicide watch after she tried to hang herself while she was being transferred to GSCF.

In a post on her Justice 4 Demi blog, Minor claimed that she was targeted by correctional officers, with one of them mocking her when she asked to be stripped searched by a woman. In a separate post, she claimed she was beaten during the transfer.

Additional information from Instablog9ja reveals she was briefly held at New Jersey State Prison, where guards allegedly called her ‘a he’ over 30 times. “I have accepted that I am in a male facility but I have not accepted nor will I ever agree to or accept that I am anything other than a woman who happens to be transgender,” Minor wrote.

She noted that on one occasion, one guard told her ‘I don’t give a f*** what you do ….there is no camera here … everyone here is man including you.”

Minor said she has been removed from Edna Mahan ‘as a punishment for what occurred over two months ago. “They have violated my right to be safe and free from s£xual hara§sment, by putting me in one of the most violent youth correctional facilities,” she alleged.

Tags ALL AN impregnated: INMATE Male moved prison to TRANSGENDER two WHO WOMEN

Previous 18 year old girl recount how her boyfriend’s bestie slept with her when she was pregnant
Next PHOTOS: Ghanaian celebrities who have admitted to ‘fixing’ their bodies