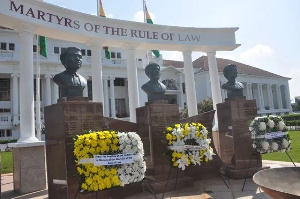 Kwabena Agyapong, former General Secretary of the New Patriotic Party, NPP, has opened up on his last encounter with his dad in 1982 before he was tricked out of the house and later found shot and burnt.

Agyapong who described the murder as ‘savage’ stated on the March 23 edition of Starr Chat on Starr FM, that he believed that persons close to the corridors of power knew about the murders of his father, two other colleagues High Court judges and a senior military man.

He narrated events of that evening as he sat down having dinner before his dad was called to ostensibly attend to an emergency concerning a colleague judge but he never returned.

“It is difficult to even recount because I become emotional. I was a young person (20-years-old at the time), because of my love for soccer I had gone to the stadium that Wednesday. I was sitting at the table having dinner with him.

“Must have been around eight o’clock, those days the curfew was around nine or so and the call came through that Justice Korangteng Addo was not well. They used to have their chambers very close to the Supreme Court building.

“So, my father was needed outside to go and have a look. It was a trick. I didn’t follow him out. So, I just felt he left and went to bed, didn’t know anything had happened that night hoping that he would come and complete his meal,” he told Starr Chat host Nana Aba Anamoah.

He said it took a visit the next morning from Mrs. Yvonne Sarkodie, wife of one of the judges who was coming to report to his father that her husband had been picked the previous night.

“So, I just went up to my father’s bedroom and he wasn’t there. I came back to the dining table, the food was still as it was, oops. Those areas had a lot of judges around, I went to my mother’s room, she was asleep,” he narrated further.

The young Agyapong rushed to Justice Adusei who was a neighbour, who called then CJ, Justice Apaloo, “that was the time in the morning when we realized that something had happened.

“Even at that time we only knew that they had been kidnapped, so the next 72 hours were perhaps the most difficult time in my life. Sat in the house waiting and hoping to hear something.”

Agyapong said with all the tension, he needed a distraction from the issues and turned to football again, it was after he was returning from the stadium that he saw lots of cars parked at their residence and that was when he was eventually informed of what had happened.

On Thursday, June 30, 1982, on the eve of the 22nd anniversary of Ghana’s Republic, the three judges; Mr Justice Fred Poku Sarkodie, Mrs Justice Cecilia Koranteng-Addo and Mr Justice Kwadwo Agyei Agyapong, all judges of the High Court and Major Acquah, a retired army officer, were brutally and savagely murdered on the night of their abduction at the Bundase Military Range in the Accra Plains.

The outcome of the investigation led to the prosecution and execution of Joachim Amartey Kwei, a member of the PNDC, Lance Corporals Samuel Amedeka and Michael Senya, and two ex-soldiers- Jonny Dzandu and Tony Tekpor.