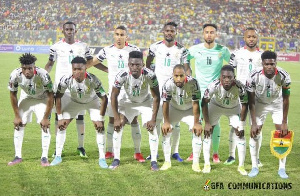 The journey to the 2023 Africa Cup of Nations begins today, June 1, 2022 for the Black Stars as they take on Madagascar in the opening game of Group E of the qualifiers.

Coach Otto Addo will be taking charge of his third game as Black Stars coach and will hope that a win will come his way.

To be able to achieve his first victory, Otto Addo will have to field the best players in the team’s camp.

As we build up to the game, GhanaWeb makes a guess-list of the likely starting team for the Black Stars tonight.

Wollacott appears to have cemented his place as Ghana’s first choice goalkeeper. Richard Ofori has since his recovery from injury been good, but there is no reason to think that Otto Addo will drop Wollacott for him.

Wollacott’s performance against Nigeria was outstanding and Ghanaians will be hoping for a repeat of same.

The Professor as they call him has nailed the right back position with his impressive performance against Nigeria.

Andy Yiadom was invited but it is highly unlikely that he will be picked over Odoi.

Baba Rahman is usually Ghana’s first choice right back but Gideon Mensah gave a good account of himself in the games against Nigeria.

Baba will be hoping to win back his place but we expect Otto to stick with the man who was crucial in the conquest over Nigeria.

Amartey should be one of the first names on the list. For both club and country, the centre back has had an incredible year.

A leader at the back and a key figure in building up Ghana’s attack, Amartey’s place in the starting team is without question.

In the absence of Alexandre Djiku, Jonathan Mensah should have a clear run at the right-sided centre back role.

Abdul Mumin is another viable candidate but in a must-win game, it is unlikely that Otto Addo will go for inexperience.

Baba Iddrisu has become a mainstay in the Black Stars with a string of solid displays. He struggled a bit in the second half of the away fixture against Nigeria but he should be fine against Madagascar.

In the absence of Thomas Partey, it is expected that Mohammed Kudus will drop a bit deeper and assume the central midfield role. He is going to be the focus of Ghana’s attack.

The Ajax man struggled in the second half against Nigeria but with more game time and against a less-fancied opponent in Madagascar, Kudus’ magical touches and explosive drives should be enough to win Ghana the game comfortably.

The darling boy of the team will surely make the starting team with Thomas Partey ruled out due to precautionary measures.

The attacking midfielder was one of best-performing Ghanaian players in the 2021/2022 season.

He is also a dead ball specialist.

The Crystal Palace forward is expected to start on the left flank and cut in with some powerful drives.

Jordan Ayew is also able to draw fouls and set-pieces for the team. He has been criticized hugely but Otto Addo is a huge fan.

Andre Ayew is expected to dominate the right side of Ghana’s attack and sometimes act as an auxiliary striker.

Andre Ayew returns to the team after missing the game Nigeria games due to a red card he sustained.

The inspirational captain is expected to lead the team to another opening.

Antoine Semenyo has impressed in training and expected to provide keen competition but the youngster will most likely start ahead of him.

The AS Roma forward will lead the attacking line for Ghana and could fancy his chances against Madagascar.

The game will be live on GhanaWeb and GhanaWeb TV