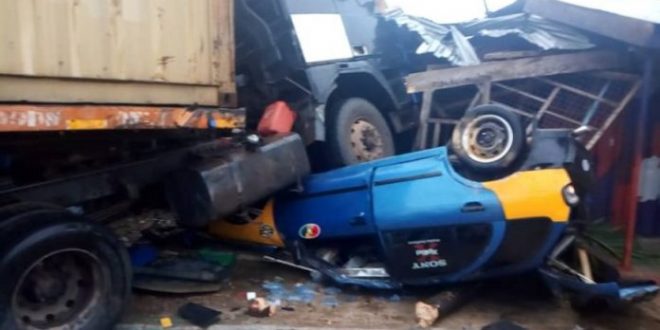 Three people have been pronounced dead at the Goaso Municipal Hospital after an Opel Caravan Taxi Cab in which they were travelling, ran into stationary Mercedes Benz cargo truck last Friday night.

The three identified as Agnes Amponsah, 20; Esther Agyei, 21; and Salamatu, 27 were pronounced dead on arrival by doctors at the hospital out of the thirteen victims of the accident who were carried to the hospital.

Their vehicle was headed towards Mim from Goaso when the driver, Ernest Agyei, 42, seemed to have lost control of the vehicle and crashed into the parked faulty cargo truck.

The deceased has been deposited at the hospital for preservation and autopsy while the injured, including the driver, are all responding to treatment in the hospital.

Meanwhile, the police Motor Transport and Traffic Directorate (MTTD) of Goaso are taking steps to tow the accident vehicles to their premises as investigations continue.

Previous Efya speaks after Nigel Gaisie’s prophecy that she will die
Next JUST IN: 4 EC officials involved in an accident – PHOTOS