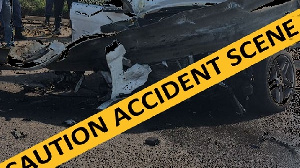 JUST IN: 4 EC officials involved in an accident – PHOTOS

Information reaching Mynewsghana.net  indicates that four EC officials have been involved in a terrible accident.

These four officials were reportedly travelling in a taxi from Asamankese heading towards Asonase in the Eastern region where they were going to register people for the last phase of  EC voter registration when the unfortunate incident occurred.

Eye witnesses say that the car in which these four officials were travelling skid off the road and entered into a ditch thereby somersaulted.

The officials of the Electoral Commission with their driver have been however rushed to the hospital.

As of now we can’t confirm if the four officials and the driver are all dead or not.