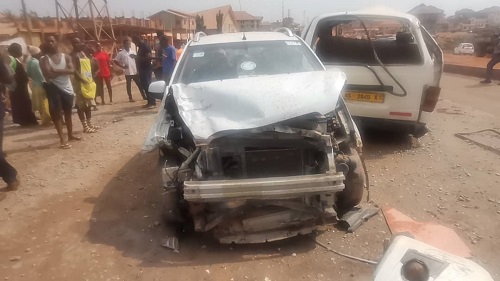 Three people are feared dead with four others sustaining serious degrees of  injuries after two vehicles clashed at  Feyiase along the Atonsu Kuntenase highway in the Ashanti Region.

Some eyewitness in an interview with OTEC News Kwame Agyenim Boateng said the Trotro vehicle which was fully loaded  somersaulted  four times immediately  it clashed with the mini  cab.

The injured they noted have been rushed to the Atonsu Government Hospital with those in critical condition sent to the Okomfo Anokye Teaching Hospital for treatment.

“The two cars were enroute Aputuogya to Kumasi but we do not know exactly what caused them to clash at that moment”. One Mr Kwadwo Nkansah told the reporter.

Some witness however accused the private car for  causing the accident claiming that the driver was on high speed clashing into the Trotro bus.

Previous The tactical approach Ghanaians should expect from Chris Hughton
Next PHOTOS: Man finds love with rich woman with a growth disorder