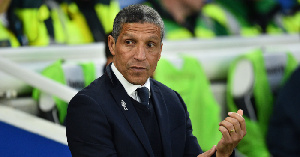 The tactical approach Ghanaians should expect from Chris Hughton

Newly-appointed Black Technical advisor, Chris Hughton is an experienced coach whose career started in 1993, when he handled the Tottenham Hotspur under 21 team.

He has been a caretaker for the Spurs first team before, then moved to Newcastle where he was handed his first ever first team role in 2009.

However, Hughton gain prominence in coaching after leading Brighton and Hove Albion to a gain promotion in 2017, breaking the club’s 34-years wait for top-flight football.

After the record-breaking promotion, he made sure that the Seagulls maintained their Premier League status for the first two season before he got sacked in 2019.

He laid the foundation and now Brighton are their way up to becoming a mid-table club under their new manager Graham Potter.

Ghana will be hoping that he will do more of the same for Black Stars‘ transition in his new role.

Hughton played as a left back during his active days. Therefore, defending is the main feature of his style coaching style.

In the season Brighton gained promotion, the finished conceding 40 goals in 46 matches. A record they shared with first place, Newcastle.

In terms of attack, they were the fifth best side, scoring 75 goals, five less than Newcastle, Fulham and Norwich.

4-2-3-1 is Hughton’s preferred formation, where he will have his back four with the full back not so expansive to give his team a compact shape.

Houghton unlike other attacking minded manager does not player a high line and thus his full backs are mostly have their areas covered.

Against sides that loves to have more of the ball, he switches to a 4-4-1-1 to help overload the opponents in the defensive areas.

The system made it difficult to break Brighton down. On the flip side, the 4-2-3-1 shape also gave them the numbers on the counter with everything going through Anthony Knockaert while Glen Murray will look to finishing off in most situation.

After securing promotion with Brighton, Hughton adopted a more cautious approach to keep Brighton in the league for two consecutive season.

This depicts a manager who knows how to work his way around situation to get the most out of them.

Brighton placed 15th in their first season with 40 points. After using a mid-block approach in the championship, he report to a dominant 4-5-1 low block to achieve his target.

Despite finishing 15th, they had a better defensive record than Arsenal, Leicester, West Ham and a few other top clubs.

However, the approach made it difficult to score goals and thus they recorded just 9 wins with 13 draws and 16 defeats.

The main highlight of his tactics at top flight is how he made Pascal Gross creators in the league.

Gross best season game under Hughton where he scored 7 and assisted 8 goals in 2017/2018 season.

The famous victory over Manchester United

Although Brighton placed 17th in the 2018/2019 season which led to Hughton’s sacking, the 3-2 win over Manchester United at the Amex Stadium will be his best wins at the top flight level.

In his two years in top flight football he beat Arsenal, Manchester United(twice), as well as West Ham, Leicester and other mid table clubs.

Tags APPROACH CHRIS EXPECT FROM GHANAIANS Hughton SHOULD tactical THE

Previous Man in court for concealing ‘wee’ in ceiling, fridge
Next 3 injured in Feyiase accident