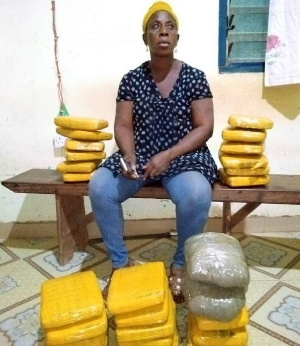 Police in the Oti Region have arrested a 41-year-old woman for possessing 27 slabs of dried leaves suspected to be contraband.

A report by Kasapafmonline.com cites a police statement according to which the suspect identified as Margaret Chapo, was arrested by officers of the Oti Regional Police Command on January 10, 2022 upon intelligence.

According to the report, the police received intelligence of some group of persons transporting narcotic drugs from Hohoe to Kpassa.

The police at about 8 pm intercepted a Ford bus with registration number VD 88- -20, with passengers onboard from Hohoe heading towards Kpassa.

A search conducted on the commercial bus led to the discovery of 27 slabs of dried leaves suspected to be Indian hemp. The female suspect was identified as the owner of the suspected illegal drugs.

Margaret Chapo, the suspect has been handed over to the Nkwanta Divisional Police Command together with the exhibits for investigation and possible prosecution