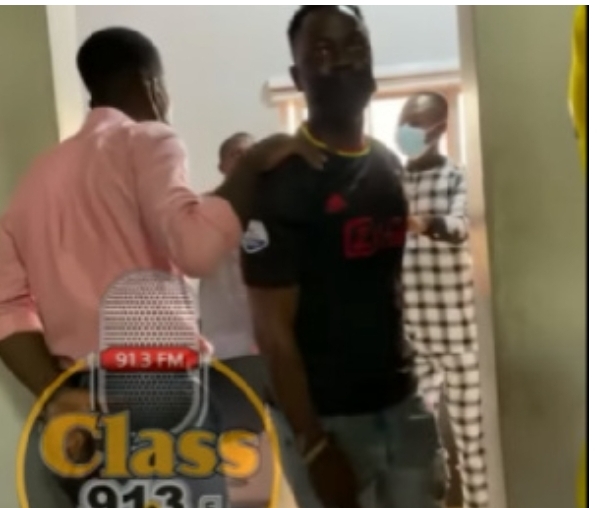 Some 20 heavily-armed policemen stormed the premises of Accra 100.5 FM at Labone, Accra, in Rambo-style on Monday, 10 January 2022, to arrest the station’s news anchor Nana Ama Agyarko for what they described as obstruction of their work and the abuse of a police officer.

Unsuccessful in their attempt to arrest the female newscaster, the station’s Drivetime host, Doctor Kay, was arrested instead by the armed policemen who alleged that he also obstructed them from doing their work.

The brouhaha began when some three plain-clothed men, claiming to be police officers, in the company of five others who also claimed to be staff of state broadcaster GBC, walked into Accra100.5FM to demand the station’s permit to broadcast the ongoing AFCON matches.

According to the men, the station had no right to broadcast the games.

This resulted in exchanges between the men and some staff of the station.

News anchor Nana Ama Agyarko, who suspected the plain-clothed men may not be police officers as they claimed – because one of them, who had short dreads, wore an earring and a football jersey over ripped jeans and slippers – requested to see their ID cards.

The untidy gentleman showed an ID but covered the picture part of it as well as his name on the tag.

This infuriated the news anchor, who called the plain-clothed man a “thief” and an “imposter” and asked them to leave the office.

The gentlemen called for reinforcement and some 20 heavily-armed policemen stormed the premises of the Labone-based private radio station to arrest Nana Ama Agyarko who was anchoring the evening news for insulting a police officer.

Unable to get access to the studio, the policemen arrested Docta Kay instead, who had earlier escorted them upstairs and attended to them when they initially came to the station.

They accused him of “obstructing the police from its duties”.

Docta Kay was taken to the police headquarters where his statement was taken and later granted bail.