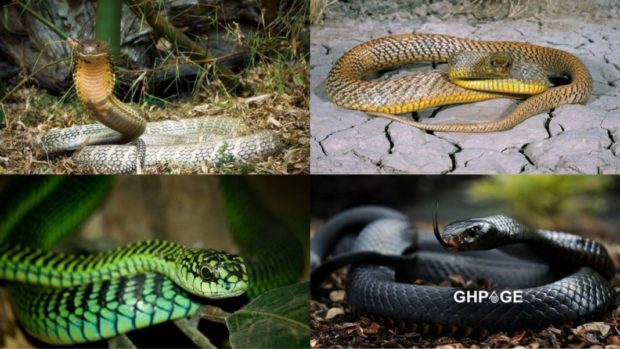 5 deadliest snakes in the world

Many of us get frightened at the mere mention of snakes even without seeing one. Although most snakes are poisonous but there are a few ones that are non-poisonous including the easter Kingsnake, Black Kingsnake, Black Speckled Kingsnake etc

In this article, we will be looking at the 5 deadliest snakes in the world.

1 Black Mamba – The savannas and rocky slopes of southern and eastern Africa are home to black mambas. They are Africa’s longest venomous snake, reaching lengths of up to 14 feet.

However, the average length is 8.2 feet. They’re also among the world’s fastest snakes, capable of crawling at speeds of up to 12.5 mph.

2. Inland Taipan – The Inland Taipan is sometimes referred to as the world’s most venomous snake, however, it is far from the most lethal.

Unlike its common and fiery-tempered congener, the Coastal Taipan, this secretive serpent is generally peaceful and rarely seen in its isolated, semi-arid habitat.

5. King Cobra – These are very venomous snakes that live in South and Southeast Asia. The reptile makes its home in forests and swamps. It can grow up to 18 feet long. And the animal’s toxic bite is powerful enough to kill an elephant.

Tags 5 deadliest IN SNAKES THE WORLD