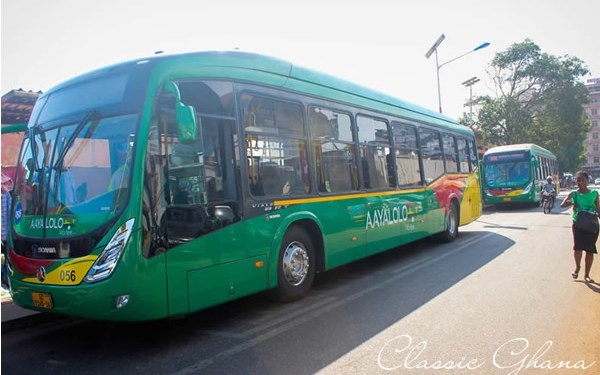 The management of Aayalolo Bus Rapid Transit (BRT) in the Greater Accra Metropolitan Area (GAMA) has announced new fares to guide its operations in the wake of the fuel price hikes.

The management, since last week, has posted a notice in all its buses announcing fare increases.

Passengers will have to pay an additional GHp50 for their daily commutes on the bus.

Per the new fares, a ride from Accra to Amasaman will now cost GHS3.50.

Even though the notice for the new fares has been pasted in the buses, it is not being charged for now.

It is not clear why the company is delaying the implementation of the new charges.

A conductor on one of the Aayalolo buses with registration number GE 9087-16 on Wednesday, 2 March 2022, told Classfmonline.com that the notice was posted last week but they have not yet received instructions to charge the new fares.

According to her, she does not know why the notice has been pasted and why they have not been directed to implement it.

It is also not clear why the management has decided to increase fares at a time when there is a struggle between the government and some commercial transport operators over the latter’s clamour to hike fares.

Some stakeholders, however, contend that there is the need for an increase in the fares of Aayalolo buses to enable the company to stay afloat in the wake of the frequent fuel price hikes.

The stakeholders are of the view that undercharging has been the bane of Aayalolo.

Meanwhile, the Head of Operations at the Aayalolo Transport System, Mr Charles Annan, has said the Bus Rapid Transit (BRT) system is the safest means of transportation in Ghana.

Mr Annan said the statistics from the Motor Transport and Traffic Department (MTTD) of the Ghana Police Service prove and validate his assertion.

Mr Annan told Accra-based Happy FM that the Aayalolo buses are the preferred means of transportation.

“Even now, because of safety concerns, Aayalolo is the most preferred choice even in the midst of traffic situations because it is much safer to travel on them than any other vehicle,” he said

Previous 5 deadliest snakes in the world
Next Gomoa Nyanyano: One man, 2 women arrested for burning TV repairer to death