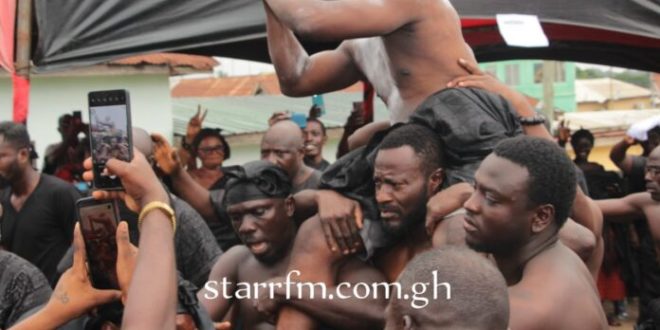 The colourful traditional ceremony held on Monday June 6,2022 at the forecourt of the Yiadom Hwedie Palace in Koforidua was chaired by Juabenhene Nana Otuo siribuor.

Odehyie Kwadwo Yeboah Gyamfi was unanimously elected by the Kingmakers from among four candidates presented by the royal family to ascend the stool.

He subsequently received overwhelming endorsement by all divisional and sub-chiefs in the new Juaben traditional area to be enstooled as Omanhene .

Juabenhene Nana Otuo Siribuor congratulated Odehyie Kwadwo Yeboah Gyamfi and thanked all the Kingmakers and sub chiefs in the Juaben Traditional area for making the process very peaceful and successful. 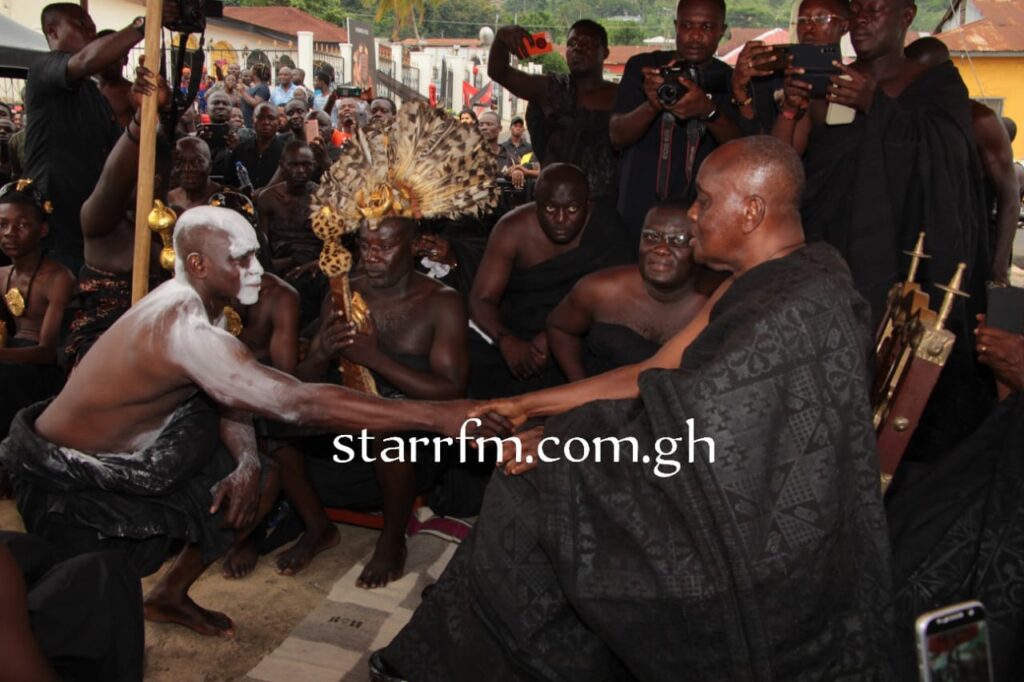 He advised the sub-chiefs to continuously unite and support the new Omanhene to bring honour and glory to the stool and facilitate development.

He said  Odehyie Kwadwo Yeboah Gyamfi, will be taken to old Juaben for intensive cultural and traditional tutelage to empower him to become a great chief.

Profile of the new Omanhene

He is the eighth born of the mother’s eleventh children.

He had his primary school education at Madonna International School in Koforidua where he sat for and passed common entrance examination in 1984.

In that same year he enrolled at St. Peters Secondary school in Nkwantia for his secondary education. In 1989, he sat for and passed the Ordinary Level Exams with distinction.

He subsequently gain admission to the New Juaben Secondary School , Koforidua for his sixth Form course between 1989 to 1991. He successfully passed the Advanced Level Examination in 1991.

Immediately after completing his A Level Course , Odehyie Gyamfi traveled to Germany and he obtained admission to the prestigious Block House College in Humburg , Germany to pursue a course in Hotel Management in 1992.

He excelled in the courses such that immediately upon completion he was offered employment as the Food and Beverage Manager at the prestigious Elyse Hotel ( Block House) Hamburg, Germany.

He occupied this position until 2011 and during that period he was also assigned to Block House Restaurant in Berlin also as a Food and Beverage Manager.

After working for close to sixteen years, Odehyie Gyamfi decided to pursue more academic excellence and this led him to pursue a professional certification in Logistics and Building Services.

On completion in 2014, he set up his own company, John Gyamfi Entumpelung Gartenarbeit – Gebaudeservice which is headquartered in Germany and with a branch in Accra – Ghana.

As the Chief Executive Officer of the company,he has oversight supervision over 30 workers and 5 trainees.

In 2019 , Odehyie Kwadwo Yeboah Gyamfi decided to broaden his scope of business and ventured into farming and together with a group of friends established a poultry farm in Ghana known as P89 in Winneba which has grown to become one of the largest poultry farms in Ghana.

Odehyie John Kwadwo Yeboah Gyamfi is married to Akosua Asiedua and had 7 children.