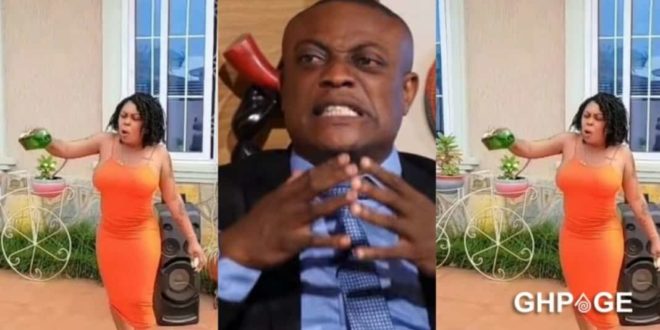 Standing barefooted, clad in an orange bodycon, with eggs and a bottle of schnapps as her ‘weapons’, Afia Schwarzenegger’s quest for vindication led her into hurling curses at Maurice Ampaw after the lawyer without mincing words on television refuted the comedienne’s claim that she had had sexual encounter with Ashanti Regional Chairman of the New Patriotic Party (NPP), Chairman Wontumi.

A visibly incense Afia Schwarzenegger was not only infuriated by Maurice Ampaw’s vehement exoneration of Chairman Wontumi; she was irked by the lawyer’s claim that she has slept with a dog.

She invoked curses on the lawyer, whoever would attempt to reverse the curses as well as any individual who would comment on the issue.

The decision to choose another over her, made her switch allegiance as she joined the campaign team of Wontumi’s contender in the NPP Ashanti Regional Chairman race, Odeneho Kwaku Appiah (COKA).

After Wontumi was announced winner of the contest, Afia Schwarzenegger poohpoohed his victory, causing a section of the public to chastise her for being ungrateful, considering that Chairman Wontumi once supported her during her father’s funeral. She later cast inuendoes, calling a fellow woman barren while stating that she [Afia] used to have sexual encounters with Wontumi. Although she did not disclose the identity of the woman she labelled barren, some concluded it was the staff of Wontumi Radio who had been chosen over her.

“Now that I have your attention… I Queen Afia Schwarzenegger will never ever work with my ex regardless of the money involved. I can’t disrespect my man like that. Aunty 2nd choice, you won nothing… You were offered what I rejected… Where were you when your boss sorry my ex was kissing my ass just for logo? Whiles you are at it, ask him how much he paid for just a picture… I’m not cheap like you…” she fumed on Instagram.

But Maurice Ampaw on Wontumi TV insisted that Afia Schwarzenegger was spewing lies. He mentioned that Chairman Wontumi would not stoop so low. The lawyer threatened that Wontumi will soon press charges against the comedienne for smearing his hard-earned reputation.