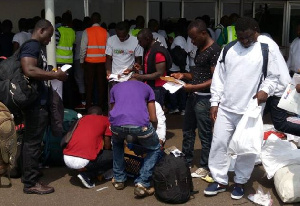 Foreign nationals being aided by locals to enter Ghana illegally

The Bono East Regional Command of the Ghana Immigration Service has overseen the arrest and deportation of some 54 Nigerians.

According to a report by Daily Guide sighted by GhanaWeb, the repatriation was confirmed by the Bono East Regional Commander of GIS, Assistant Commissioner of Immigration (ACI) Francis Annor.

According to ACI Annor, the group was rounded up on Sunday, December 5, 2021.

They were processed on Monday and sent back to their home country on Thursday.

They were made up of 52 males and two females.

The Regional Commander stated that the GIS last month, in a similar operation, arrested and repatriated a bus full of Togolese citizens last month.

According to the Commander, the foreigners entered the country illegally using motorbikes and tricycles and with the help of some residents in the region, converge at Tuobodom before hiring a bus to travel to their final destinations.

ACI Annor has thus advised residents of the Bono East Region to desist from aiding expatriates from entering the country illegally.

Ghana’s land borders have been closed to human traffic since March 2020 when the COVID-19 broke out locally.

Source: www.ghanaweb.com
Related Topics:deportednigerians
Up Next