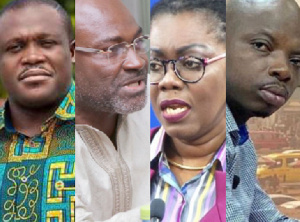 6 ‘no-nonsense’ politicians who always stick to their guns

In Ghana’s political dispensation, there exist a group of politicians who are known to be soft, reserved and headline-shy speakers.

There also exists a category who have carved a niche as being foul-mouthed, loud, and headline-grabbers by virtue of their penchant for direct, confrontational, and hard takes on issues.

Here is a listicle of politicians who have no iota of fear to speak their minds:

The NPP Bono Regional Chairman’s name rings a bell when it comes to this category of politicians in Ghana.

Best described as a ‘lose-talker’ by critics, Abronye DC has no limit to what he can say on air or on TV.

One of his comments has recently landed him in court after he was arrested by the police for his statement that suggested that former President John Dramani Mahama was plotting a coup to return to power.

He is known to have slammed many leaders irrespective of their position or age.

Member of Parliament for Assin Central has no limit to what he can say on any platform he gets.

Kennedy Agyapong seems to have an opinion on every matter irrespective of the topic.

He has attacked journalists, pastors, politicians, and even his baby Mama, Adwoa Safo.

In recent times, he is reported to have called for the removal of Adwoa Safo as Member of Parliament for Dome-Kwabenya amidst the controversial E-Levy consideration in Parliament.

He said “I think she is wrong. She should rather apologize to the party. They [NPP] should stop begging her. I support calls for her removal if she doesn’t come but to sit there [in the US] and make demands.”

The Assin Central MP further alleged that his baby mama was given GHS 120,000 by the Chief of Staff, Akosua Frema Opare, to be deposited in Adwoa Safo’s bank account as part of measures to get her to cooperate with the party, but it seems she is refusing to budge.

Aside from this, the Assin Central MP is known for his comment that led to the murder of a journalist, Ahmed Suale, who worked with investigative Anas Aremeyaw Anas.

Kennedy Agyapong in an interview with Oman FM said Agyapong revealed Suale’s name and the neighbourhood he lived in. “If you meet him somewhere, slap him… beat him. Whatever happens, I’ll pay,” he said.

Unfortunately, Ahmed Suale met his untimely death after he worked with Anas on the famous “Number 12: When Greed and Corruption Become the Norm” documentary in January 2019.

To this day, no arrest has been made in line with his murder. But many have blamed the lawmaker for the comment and for unveiling the identity of the journalist.

As to his comments and attacks on former president John Mahama, the least said about him the better.

Former National Organizer of the National Democratic Congress Koku Anyidoho carved a niche as being foul-mouthed and loud after he lost his General Secretary position against Johnson Asiedu Nketia.

His ill-will comments against the party after he lost the election led to his suspension from the party.

Even though the exact reason for his suspension was not stated, many believe it has something to do with his utterances.

He has often known for linking the death of former president Prof. Evans Atta-Mills to John Mahama alleging that “President Mahama should tell Ghanaians what killed Atta Mills.”

Earlier this year, hinted he wants to probe into Atta Mills’ death in order to clear my name.

He also accused former president John Mahama of sidelining him when he assumed the position of Ghana’s president after the death of Evan Atta Mills.

The National Women Organizer of the National Democratic Congress (NDC), Hannah Bissiw is one ‘fire brand’ with no boundaries.

She is known for her hard takes on issues. Even though the country is 2 years far from the next election she has already told Ghanaians what they should expect in the next general elections.

“If you come with guns, NDC will do same”, Hanna Bissiw to NPP.

“When they come at us with guns and bullets, we will face them with guns and bullets. We will no longer be diplomatic, enough of that. They have taken advantage of our diplomacy. The 2020 polls was a coup. They used the army and police to kill people before they could win that election,” she said.

Hanna Bissiw is known for her strong comments as a politician. She is also noted to have asked Akufo-Addo to ‘stop killing innocent Ghanaians and fix the country’

Communication Minister, Ursula Owusu-Ekuful cannot be left out on this list.

Even at the commencement of the 8th Parliament, Ursula topped headlines on many new portals after she sat on the laps of Mintah Akandoh and also pushed Collins Dauda off his seat.

Her position and comment especially on Communication tax, COVID-19, and E-Levy topped the headlines.

As for the continuous banter with Sam George in regards to the amount AirtelTigo is unexplainable.

Communications Minister said AirtelTigo was acquired by the government for just a dollar.

Sam Goerge has claimed this is untrue as he continues to pursue the minister to tell Ghanaians the amount it cost the taxpayer for the government to acquire Airtel-Tigo.

The Ningo-Prampram MP will put you in order should you cross his lane.

He is noted as one of the MPs who will not ignore you if you attack him either peronally or via socaial media.

He is noted for is fight against LGBTQ+ acts.

“You can’t leave Australia with your two left legs and dictate to us” these were the words of the Ningo-Prampram MP to the former Australian Ambassador, Gregory Andrews, in his attempt to fight for homosexual rights in Ghana

Sam George who was upset used some unprintable words on the High Commissioner and vowed to beat him up, “if he decides not to behave like a diplomat.”

Tags 6 always guns NO nonsense POLITICIANS stick THEIR to WHO