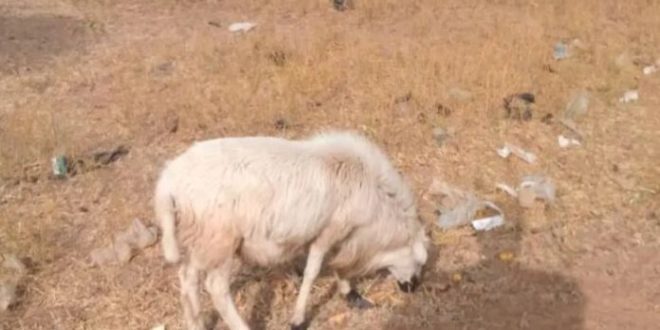 Mason on the run after having sex with pregnant sheep

A mason believed to be in his early twenties is currently on the run after allegedly having sexual intercourse with a pregnant sheep at Assin Foso in the Central Region.

The incident happened in the afternoon of Thursday, April 14,

Information gathered indicates that the sheep after the ordeal had serious injuries which left the vulva seemingly pulling out.

An eyewitness, Stephen Bentsil said he heard a cry of the sheep in a nearby bush so he quietly went and hid behind some uncompleted building to see what was going on. he said to his shock, he saw the suspect had gripped the pregnant sheep and was having sex with it.

According to him, though the sheep cried uncontrollably during the act, the suspect did not stop having sex with it until he ejaculated.

The eyewitness further stated that the suspect after having the first round of sex with the sheep wrapped his sperm in a polythene bag. It was during the second round of sex that he was caught red-handed.

The suspect was then beaten mercilessly by some angry Youth until he managed to free himself and fled leaving behind the sperm.

Meanwhile, residents say they believe that the suspect was directed by a spiritualist to commit the abominable act for quick money or for some rituals.

Residents are on a manhunt for the suspect, while the case has been reported to the Assin Foso Police Command for an investigation.

Tags after having manson on RUN sex THE