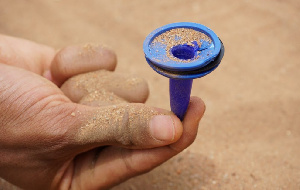 When we talk about the good old days, we’re mostly talking about the days of ‘Kwasasa Yo’, Cabin Biscuit, and FunPop.

Those days also included ‘Pimpinese’ and Dr. Beckley, but we don’t like to talk about the latter.

While we’re reminiscing about the good old days it has also been realized that kids nowadays do not play such games anymore.

Most kids have now resorted to electronic games and this does not wipe away the lasting legacies of the old Ghanaian classic games that deserve their own hall of fame.

P.S: You might not be able to relate to these old games if you were a rich kid (Dada ba) at that time.

Whenever you saw a group of boys huddled in the sand together during beak-time then you already knew what game it was. It took a special skill to spin and an even more special skill to not cry when they used they used the spinning top to hit the back of your hand when you lost. All those hand moves were wasted when they could have been professional fufu kneaders.

The neighbourhood kids would be running up and down the compound because of this game. An object like a broomstick would be hidden according to the number of players. One of the kids would referee and hide the sticks while the participants closed their eyes. When the referee shouted “pi-lo-lo”, the participants would have to find the hidden items. The finish point would be where they’d have to send the stick. First to finish would be winner.

The rule was simple. Say Zanzama before sitting down or you would chop the knock of your life. Sometimes, I wonder if the reason I keep forgetting tasks is because of all the Zanzama knocks from JSS.

In this case, you might have bought your toy cars Made in China. I make my own toy cars with milk tins. We are not the same.

Counters Ball was just a vibe. We’d draw up a miniature football field. Use counters as the players and the ball from a Sure Roll-On Deodorant. Talk about ingenuity and recycling. The OG Green generation.

We need a national Ampe Tournament. Quiet as it was kept, ampe was where most of the girls had their revenge. They’d pick their faves to join their team and be dramatic with the leaping and leg movements. If you lost they’d toot their fingers aloft in a gunshot, “I’ve shot you. You’re out!” What a time to be alive.

Four goal posts. Four cardinal points. Four players. One football. Each player got one kick until another had kicked the ball. If you were scored you were out and another player would come and take your goal post. I have a vivid memory of the ball being kicked unnecessarily hard to my shin and calves. Tears.