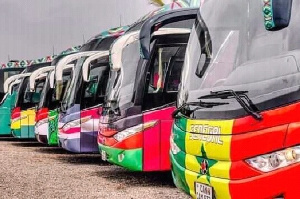 The Cameroonian government has reportedly been on red alert after 89 of the buses they bought for the 2021 Africa Cup of Nations vanished into thin air after the tournament.

According to the Cameroonian daily L’Anecdote, 89 out of the 90 buses put into circulation for the occasion have vanished and the only bus remaining is that of the Indomitable Lions which the team is using for their home games.

This comes barely two months after the closing ceremony of the 33rd edition of the African Cup of Nations Football played in Cameroon which saw Senegal beat Egypt to win their first trophy.

Earlier it was reported that the Cameroonian government is yet to pay some workers for the 2021 AFCON before the mysterious disappearance of 89 buses used for the tournament.

The Terenga Lions of Senegal beat the Pharaohs of Egypt to win their first trophy as a country in the 2021 Africa Cup of Nations.

GhanaWeb will follow up on this story and keep you updated.