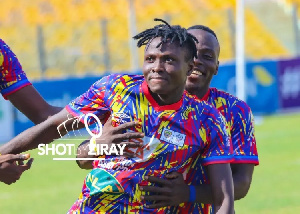 Just last Sunday, the defender started for the Phobians and equalised with a fantastic strike from a free-kick when the team drew 1-1 against struggling Elmina Sharks.

Following his bright start to life in the Ghana Premier League, sources are reporting that Samuel Inkoom is now wanted by Sivasspor.

Should things go according to plan, the right-back will join the Turkish Super Liga club in the summer transfer window.

In the past, Samuel Inkoom has played for top clubs abroad including Sekondi Hasaacas, Asante Kotoko, Basel, Dnipro, D.C United, Boavista, Antalyaspor, and a few others.

At age 32, Samuel Inkoom has shown in the few games he has played for Hearts of Oak that he has the energy to keep going for a few years.