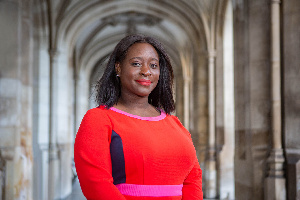 There is something interesting happening in the politics of the United Kingdom, as two Britons of Ghanaian descent are on the opposite sides of the UK treasury.

Kwasi Kwarteng, a British-born Ghanaian, was recently appointed by Liz Truss, the 56th Prime Minister of the United Kingdom, UK, as the new UK Chancellor of the Exchequer.

His appointment made him the first Black to ascend to such a position regarded as only second to the Prime Minister’s office in UK political circles.

Before his new role as the Chancellor of the Exchequer, the Conservative MP for Spelthorne was the Business secretary under Boris Johnson’s government.

As the Chancellor of the Exchequer, the British of Ghanaian descent is responsible for raising revenue through taxation or borrowing and for controlling public spending. He has overall responsibility for the work of the treasury.

Here is the interesting twist to Kwasi Kwarteng’s appointment.

Abena Oppong-Asare, a Labour Member of Parliament for Erith and Thamesmead, is to give her ‘Ghanaian brother’ a stiff opposition as she becomes a shadow exchequer secretary to the treasury.

Born in 1983 and elected as MP on December 13, 2019, Ms Oppong-Asare in speaking about her life before politics said, “I was once told that the chances of someone like me getting a job in Parliament were very slim, and to not even bother trying.

“The unfairness I felt about this drove me to challenge the barriers that I faced as a black woman and I was honoured and privileged to be elected as a Member of Parliament for Erith and Thamesmead.”

“All my life I’ve fought for local people, speaking truth to power on behalf of some of the most vulnerable in our communities. I represented Erith on Bexley Council, speaking up for our area at the town hall and helping to lead the Labour group of Bexley councillors as deputy leader and spokesperson for education.

“I worked at the Greater London Authority, supporting our GLA members to effectively represent the people of London. In the aftermath of the Grenfell tragedy, I led community engagement work for the GLA and Mayor Sadiq Khan, making sure that the people of London were heard to stop anything like this from ever happening again. Most recently, before I was elected as your MP, I led resident engagement for a local authority, ensuring the voices of residents helped to shape local services,” Abena Oppong-Asare wrote on her website.

Speaking about her political work, the Labour MP noted that shortly after she was elected an MP, she was asked to serve as Parliamentary Private Secretary to Labour’s Shadow Environment Secretary.

“In that role, I helped to steer legislation on the environment and agriculture through Parliament and hold the Government to account,” she said.

“No one should face barriers to public life and I’ve been fighting to break down those barriers throughout my political career. I am very proud to be Chair of the Labour Women’s Network, which plays a key role in getting women elected into political office.

“I was previously appointed to the Race Equality Advisory Group‏ to provide race equality policy ideas and I am the co-author of ‘Stand Up and Be Counted: Be a Councillor’, a publication encouraging and providing practical advice for women from diverse backgrounds to stand for council. If you’re interested in getting involved in politics, please don’t hesitate to get in touch and I’ll provide any advice and support I can.

“Through all of my work, I am determined to work with local residents, community groups, businesses and public services to ensure that Erith and Thamesmead is put on the map and we get a fair deal for our community,” Abena Oppong-Asare stressed.

Previous Pay attention to size of baby’s head, report any abnormality – Parents told
Next I’ll go mad if wee does not enter my system for a day – Kelvyn Boy