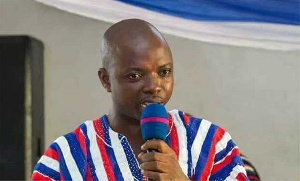 A few hours after the Ghana Police Service issued an invitation to the Bono Regional Chairman of the New Patriotic Party, Kwame Baffoe, to appear before it to help with investigations into claims he made on a radio show, the latter has said he is ready to honour the invitation.

Abronye DC, as he is popularly known, said the invitation of the Accra Regional Police Command is one that he cannot deny, adding that he will even be there ahead of the deadline.

“I think they stated the reason for the invitation and it’s in their letter. They ask that I appear at 4:00 pm but I will be there earlier because they only need me to assist with investigations and I am going to honour it,” he said, reports adomonline.com.

Abronye DC explained that it would not be the first time he is being invited by the police about a claim he has made with regards to the former president, John Dramani Mahama.

“I am being invited by the police about former president Mahama and I provided them with all the information but they told me later that Mahama is not ready to continue the case meaning the police didn’t continue the case and so my worry is about the evidence they fail to act on,” he said.

He also gave assurances that he will be willing to help with the police investigations as much as he can.

Abronye DC made the allegation in an interview on Hot 93.9FM’s political talk show, “Dwene Ho Bio,” and sighted by GhanaWeb.

He had claimed that John Mahama had met with the Al Qaeda militants in an attempt to stage a coup in Ghana.

According to the NPP stalwart, John Mahama is in ties with the group to help him undertake a coup to become president again.

Abronye DC was responding to issues leading to the arrest of convenor of the #FixTheCountry Movement, Oliver Barker-Vormawor, who had also made claims of leading a coup should the controversial E-Levy be passed.