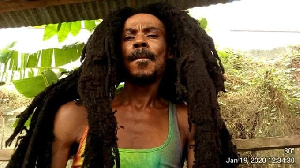 Tyrone Marghuy has stabbed his father in a bloody dad-son brawl, Tereo Marghuy, the father, has alleged in a video on social media.

According to him, his serial and incorrigibly violent son has been attacking and abusing him physically way before he became a media sensation after Achimota Senior High School refused to admit him due to his dreadlocks.

In the video, Mr Marghuy, while displaying a lacerated and bloodied arm to the camera, said: “This is what Tyrone has done to my hands; he spoilt his sister’s tablet and they were supposed to take it to the repairer this morning”.

“The sister came to tell me they were taking the laptop to the repairer”, he narrated, adding: “I went to see them in the room and she said Tyrone is not ready”.

“Long story short, they had an argument and so I went back there to ask him why, and he just unplugged the laptop and started to walk over me and he’s been doing this all these years, and which his mother tolerates”, Mr Marghuy alleged.

“She [mother] even asked me one time why I don’t want anybody to have peace in this house when my son does something wrong and I’m telling him.”

He said even before the Achimota case, he [Tyrone] was so arrogant, and, so, I wasn’t even ready to follow him anywhere. I went to the court with him and defended him just for the sake of humanity, for the sake of Rasta. If it had been only because of this boy, I wouldn’t have gone,” he added.

“This is the third time something like this is happening because he walked over me and I rushed at him. I wanted to slap him for doing that. He does it every time and he gripped my hand so hard. I don’t know if he had something or whatever with him and this is what he has done,” Mr Marghuy alleged,