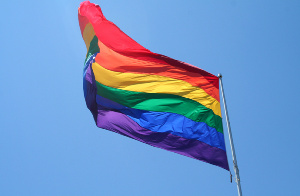 A Muslim Bisexualist Danjuma Yahaya has gone into hiding an anti LGBTQ+ task force launches a search for him after killing his partner at Sabon Zongo in Bawku.

The divorcé father and his three daughters are believed to have fled the town for their lives after surviving the Sunday night raid which caused the death of Baba Ali.

Reports indicate Danjuma Yahaya and his partner Baba Ali were busted at their private residence by a rampaging anti-LGBTQ task force established to ensure the Bawku township is cleared of any LGBTQ activity. Ali was in Yahaya’s residence when he was captured and beaten to death, the reports add.

The 15th of May attack is said to be the most brutal crackdown ever to be carried out by the task force in their 2 years of operation.

Yahaya, a cattle farmer, has been staying with his three girls in his private at the residence after divorcing his wife

His Bisexual life was not known until he divorced his wife a year ago out of a painful heartbreak, neighbours say.

His wife, Ladi Abu, was reportedly caught cheating with Yahaya’s bosom friend in a Hotel, putting their 14 years-old marriage in tatters.

Though a devoted Muslim, Yahaya vowed not to have anything to do with a woman in his life again after his failed marriage with Ladi.

However the community became suspicious of him after Baba Ali, a known bisexualist man, was frequently seen visiting Yahaya’s residence at odd hours.

Their action comes at the back of a claim by the Member of Parliament Honourable Mahama Ayariga that the LGBTQ+ “do not have rights in Ghana”.

It is believed that the 15th May raid was carried out upon a tipoff by some Muslim neighbours of Yahaya after Baba Ali visited him that faithful night.

Under serious threats amid a pandemonium at the residence, Yahaya was able to sneak out through the window while his partner Baba Ali could not find any refuge.

He was beaten with heavy stones till he became lifeless, while his attackers chanted in jubilation and openly declared war on LGBTQ+ society

Bawku, a town in the Upper East is known for its traditional beliefs and predominance in Islamic practices.

In February 2021 the Bawku Central lawmaker Mahama Ayariga warned the LGBTQ+ community to recognise they have no rights in Ghana.

Speaking on a live TV broadcast, Honourable Ayariga said people who own up to being homosexuals in the country must be identified and face prosecutions.

Meanwhile, the community leaders of Sabon Zongo have announced a handsome reward for any report that could lead to the arrest of Yahaya, who is believed to have moved southwards of the country where people are believed to be a bit liberal with LGBTQ+ practices.

Besides Islam and Christianity, Ghana has a strict traditional rule against LGBTQ activities, which over the years has contributed to the heightened homophobia and discrimination faced by the LGBTQ community.

In 2021, members of Ghana’s LGBT community spoke out about the discrimination they face, after a centre for the community was forced to close amid anti-gay threats.

Previous Terrorist attack: I have a feeling something bad is about to happen – Dormaahene
Next Achimota Rasta star student stabs father in bloody fight – Dad alleges