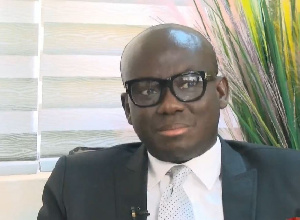 AG goes to court over €2.37M in ambulance deal

The Attorney-General and Minister of Justice, Godfred Dame, has refuted claims made by the Member of Parliament for the Ejumako-Enyan-Essian constituency, Dr. Cassiel Ato Forson, on his abuse of prosecutorial powers by his office.

In a statement signed by the Deputy Attorney-General and Deputy Minister for Justice, Diana Asonaba Dapaah, it said that the statements by the Ranking Member on the Finance Committee of Parliament are absurd and misleading.

“The said press statement was laden with factual misrepresentations and calculated at scandalising the criminal proceedings pending in the High Court, Accra against the Member of Parliament and exposing the Attorney-General to prejudice and hatred.

“The Office of the Attorney-General considers the allegation by the Member of Parliament that, his prosecution for a crime bordering on misapplication of public funds and willfully causing financial loss to the State whilst holding office as Deputy Minister for Finance between 2013 and 2017, is related to concerns the Member of Parliament had “started raising about the 2022 Budget and Economic Policy of the Government, rather absurd and misleading,” the statement stated in part.

Dr. Cassiel Ato Forson, together with two others, have been dragged to the Accra High Court by the Attorney-General on five counts of willfully causing financial loss to the state, abetment to willfully cause financial loss to the state, contravention of the Public Procurement Act, and intentionally misapplying public property in the purchase 200 ambulances between 2014 and 2016.

But in response to the suit at a press conference, Dr. Cassiel Ato Forson described it as politically motivated by President Nana Addo Dankwah Akufo-Addo and the AG to silence him over his critique of the controversial E-Levy.

He also detailed that, “a cursory reading of the frivolous and politically motivated charges shows that my only role in the entire transaction was to have signed a letter on behalf of the Minister of Finance, in my capacity as Deputy Finance Minister, for the establishment of letters of credit by the Bank of Ghana and for payment by the Controller Accountant General of the charges for the letters of credit.”

This, the AG’s office has stated, cannot be true, giving the reasons as:

“Investigations into financial crimes perpetrated against the Republic of Ghana in the matter of the failed purchase of ambulances for the State began in 2017. Same had been ongoing since 2017 with a number of statements taken from various persons at different points in time, including the Rt. Hon. Alban Bagbin, former Minister for Health (now Speaker of the Parliament of Ghana), Mr. Kwaku Agyeman-Mensah, Madam Sherry Ayittey and Dr. Alex Segbefia, all former Ministers for Health as well as the first accused,” the statement said.

The statement that with regards to the case in court, the vehicles that were said to have been brought into the country to be transformed into ambulances turned out to be unfit for the intended purpose.

“Pursuant to the unlawful directives of the first accused, Big Sea shipped 30 vehicles in three consignments between October, 2014 and February, 2015, which were fundamentally defective and lacking in the basic requirements for an ambulance. This is confirmed by a letter written by the then Minister for Health, Dr. Alex Segbefia and other assessments by the National Ambulance Service. In point of fact, the vehicles turned out to be unfit to be converted into ambulances.

“In the circumstances, throughout the remainder of the tenure of the John Mahama administration (from December, 2014 to January, 2017), the vehicles were never converted into ambulances,” the statement said.