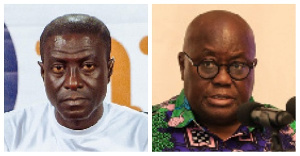 This action of the president, Captain Smart said, was one of the reasons why he came to admire President Akufo-Addo so much.

He added that aside Akufo-Addo’s rejection of ex-gratia, he also refused many of the unnecessary benefits that the political leadership of this country receives.

“… there are certain things that made me love Nana Addo. Nana Addo never took the MP’s Common Fund, and he used his own resources to lobby for projects in his constituency… Nana Addo never took ex-gratia as MP and a Minister; he said the government should use the money where it is needed.

“Nana rejected governments cars when he was Minister for Justice and Attorney General and Foreign Affairs Minister; he bought his own fuel. He made the government scrap the maintenance allowance on his salary,” Smart said in Twi during his ‘Maakye’ show on Onua TV, monitored by GhanaWeb.

Captain Smart made these remarks reacting to an attack by broadcaster Paul Adom Otchere on the Paramount Chief of the Asogli Traditional Area, Togbe Afede XIV, for returning a GH¢365,392.67 ex-gratia for his service on the Council of State on the grounds that the payment was inappropriate for a short, effectively part-time work.

Adom Otchere said that Togbe Afede XIV must take the ex-gratia because it forms part of the many benefits he has already taken and threatened to sue the Controller General if the money was not given back to the Chief.

Captain Smart said that Adom Otchere must sue all formal Article 71 office holders who rejected the ex-gratia, including President Akufo-Addo.

He said that “Paul Adom Otchere is an unseasoned braggart and an unwise chameleon that attracts no colour” for his attack on Togbe Afede.

Watch Captain Smart in a video below: