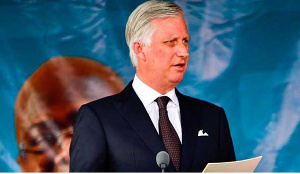 Belgian King Philippe has said that his country’s colonial past in the Congo was based on racism, as the monarch tried to undo his predecessors’ misdeeds in the 20th century.

In Kinshasa for the first time since ascending to the throne, King Philippe said his country takes full responsibility for the past misdeeds, but he did not apologise for the mistakes which have been documented, including ethnic cleansing, plunder, and torture.

He said, however, that the common history of the two countries should not be forgotten “in order to pass on to the new generation a peaceful memory”.

He said the colonial regime was based on “exploitation, domination, unequal relations, discrimination, and racism.”

The Belgian sovereign reiterated his “sincere regrets for the wounds of the past.”

The Belgian King’s speech was poignant, say some Congolese, but others argue that King Philippe’s “regrets” are not enough. They said “Belgium should have apologised”, especially for the executions during the time of King Leopold II, who had made the Congo his private property from 1885 to 1908 before the colony was handed over to Belgium.

Some historians estimate that 10 million Congolese died or disappeared as a result of the repression of this period. Some Congolese had their hands and feet cut off.

“We will never look to the future without an apology and reparation from Belgium,” argued Francine Muyumba, a vocal Congolese politician in Kinshasa. She argued that Belgium had slowed down discussions on compensation.

“At the level of the Inter-parliamentary Union, with the Belgian parliamentarians, we had agreed to work together in this direction,” she said.

She was responding to Belgian Prime Minister Alexander De Croo, who said the King’s speech had closed a chapter of horror.

“We look to the future with a strong desire to cooperate and further enrich the human ties that exist between Belgium and the DRC,” the speech said.

The King’s trip was nonetheless historic for both the DRC and Belgium. President Félix Tshisekedi and King Philippe expressed their desire for the two countries to open a new chapter in their history. The two leaders gave two speeches at the “People’s Palace”, the seat of the Congolese parliament, on the occasion of the Belgian sovereign’s visit to the DRC.

It was the first time for a Belgian monarch to address Congolese citizens, since the controversial speech by King Baudouin on June 30, 1960, on the occasion of Congo’s accession to independence. King Philippe did not shy away from the painful past of the colonial period, unlike President Tshisekedi, who said that the most important thing is the future and development.

“Our past is both glorious and sad. But the aim here is to build something new, something constructive for our two countries. It is up to Belgium to know what it wants to do with its past. But we want to look to the future. Today, there are climate issues. These are things we want to tackle rather than dwell on the past and risk raising new and unnecessary tensions,” the Congolese president said.