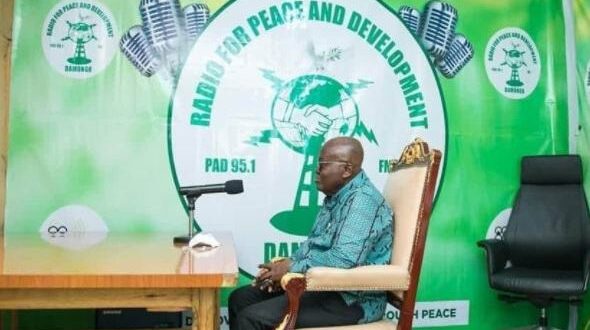 President Nana Addo Dankwa Akufo-Addo and his presidential seat have been trending in recent times. The President has been seen with his seat in some viral photos on more than one occasion and some social media users have raised questions about this.

This comes after pictures of him at a radio station with the presidential seat surfaced on social media.

During Akufo-Addo’s tour in the North East Region, he visited PAD 95.1 FM for an interview along with his presidential seat. The usual studio seat, according to the picture making rounds, was shifted aside, and replaced with his.

Also, during his visit over the weekend in the Ashanti Region, his presidential seat was taken along with him for an interview with Wontumi Radio Station among others.

There have been mixed reactions since the pictures emerged in the public space, as some say it’s a standard protocol while others have attached spiritual connotations.

Gabby Otchere-Darko, who commented on the Facebook post by Francis Kenndy Ocloo, explained that it was to keep him protected from Coronavirus.

Below are some of the comments:

“Not even did Mobutu think of doing this, you carry your office chair which is not yours but government from Accra to the North East region for an interview in a radio station?????????”

Compare and Contrast if it is a TRADITION…or a newly established by His Royal Majesty Oga President ????

Below are some videos of the President at Wontumi TV: