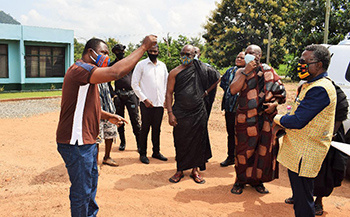 Armed soldiers raided at least five houses in the border town of Honuta in the Ho West District on July 7 and subjected the occupant to terror after falsely accusing them of hosting Togolese contracted to take part in the voter registration exercise, the Honuta Traditional Council has confirmed.

This was during the second day of the voter registration exercise in the area.

Elder Robert Atutornu, secretary of the council stated that the soldiers who were supported by a vigilante group ransacked the rooms in the houses they invaded but found no Togolese in any of the rooms.

He made the startling revelation when the President of the National House of Chiefs, Togbe Afede XIV and members of the Volta Region House of Chiefs called at the palace of the acting Paramount Chef of Honuta, Togbe Agamasu II, during their tour of some border traditional areas at the weekend.

The tour followed growing reports of unmitigated harassment of people in those communities by personnel of the security agencies.

Elder Robert Atutornu said that the invasion of homes by the soldiers had left the people of Honuta in a state of great fear and anxiety.

In one instance, he said that the Awafiaga (war lord) of Honuta, Togbe Awudzatse IV was travelling with one of his sub-chiefs to nearby Akorme, only for them to be intercepted mid-way into the journey by the thugs who were assisting the security agencies.

According to Elder Atutornu, the thugs ordered the Awafiaga and the sub-chief to return to Honuta after telling them that their faces looked more Togolese than Ghanaian.

The Awafiaga and the sub-chief did not budge, the visiting delegation was told.

The Honuta Traditional Council secretary said that some farmers at Honuta who turned up at the registration centres were turned away by security operatives who described them as Togolese.

He said that the fertile farmlands of Honuta were also occupied by people from Adaklu, Goviefe, Akatsi, Ho and Krobo which were all in Ghana, adding that no Togolese nationals crossed into Honuta to register at any of the centres during the exercise.

Elder Atutornu said that the people of Honuta had lived in peace and harmony with neighbours in the Klor Prefecture of Togo for years, insisting that there was no conflict between them to warrant a military intervention.

“It beggars belief that some people are now re-defining the border between us to tell us who is a Ghanaian and who is a Togolese,” he told the delegation.

In response, Togbe Afede said that the reports were most unpleasant.

For that matter, he gave the assurance that the Volta chiefs would seek a meeting with President Nana Addo Dankwa Akufo-Addo as soon as possible to address the problem.

The chiefs also visited the Honuta Border Post which remained closed with no crossing into Ghana or Togo.

The DCE Mr Ernest Victor Apau turned up at the border post to meet with the chief but that was not part of their agenda.