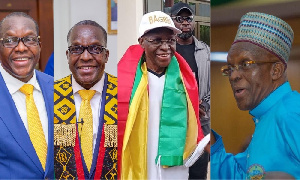 Speaker of Parliament, Alban Bagbin who is now cooperating with the government in the conduct of business has seen concerns being raised about his new looks after he underwent a first, second and third medical review in the United Arab Emirates (UAE).

The exact nature of what sickness ails Mr. Speaker Alban Bagbin is not public knowledge, but it is noted that he has lost considerable weight, looking emaciated and tired compared to his looks on in early 2021 when he was elected.

Attention was drawn to the health of the Speaker of Parliament after he left Ghana on November 27, 2021, to Dubai to undergo what was said to be a routine medical review. He returns two weeks later in December 2021 only to return for a second on January 7, 2022.

After returning from his second medical checkup on January 23, he was expected to Jet off again in March 2022 for a third review that now raised eyebrows.

During his first trip, Mr. Bagbin was accompanied by his wife, Mrs. Alice Adjua Yornas, Head of Parliamentary clinic, Dr. Prince Kofi Pambo, the Speaker’s Secretary, and his aide.

He embarked on his first medical trip a day after he presided over Parliament’s chaotic developments that saw the Members of the Majority side of Parliament staging a walkout during processes to approve the 2022 budget and the House’s subsequent rejection of the same.

This led to Members of the Majority Caucus expressing worry about what they say is the ‘frequent absence’ of the Speaker from the House, especially when the Electronic Transactions Levy Bill (E-levy) was expected to be re-submitted for discussion.

A Supreme Court ruling eventually provided a way out even after the government found a conduit to convince the Speaker to cooperate with the government in parliament.