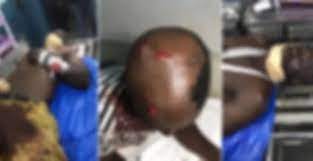 Three persons are currently battling for their lives after they sustained machete injuries in a clash following chieftaincy disputes at Sanso, a suburb of Obuasi, in the Ashanti Region.

The chieftaincy clash, according to some residents, was between Chief of Sanso Okatakyie Bawuah Okyere Darko and Chief of Adumanu Nana Asrifi Asare. Their disputes, according to the natives, have affected development in the areas.

Speaking on Akoma FM‘s current affairs and political show GhanAkoma Wednesday, April 13, one of the victims who sustained severe injuries from a pair of scissors explained that but for God’s intervention a different story might have been told.

“The youth of Sanso have been in bad terms with the chief [Okatakyie Bawuah Okyere Darko] so when the youth started the agitation, the crowd gathered there so I saw some people fighting and I decided to separate them,” narrated Michael Owusu Tieku.

“The son of Sansohemaa [Queen] stabbed me multiple with a pair of scissors in my head so I was rushed to the hospital.”

The victim further explained other guys also sustained several degrees of injuries from machetes and other lethal objects.

Akoma FM sources say the youth are up in arms against the chief of Sanso because he has been preventing them from mining in the area.

Obuasi District Police Commander DSP Martin Asenso, who joined the conversation via phone, added that “at about 10:00am Monday, we had a distress call that some youth are gearing up in a chaotic manner to face the chief of Sanso. So we deployed our guys and had to reinforce with another vehicle full of personnel to arrest the situation”.

“Though we didn’t record any casualties, some of the agitators there were sustained injuries so we had to calm the situation and advise the youth to avoid resorting to violence when addressing issues.”

The Commander further admonished the political heads of the area to ensure that grievances of the youth are addressed because from all indications it seems there’s a terrible standoff looming as a result of unemployment and other pertinent issues.