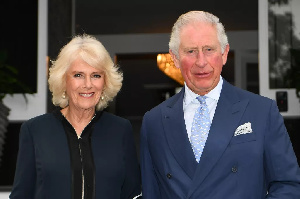 All about the wife of King Charles – Queen Consort Camilla

In February 2022 during her platinum jubilee, the late Queen Elizabeth II confirmed that Camilla, the wife of Prince Charles, the heir apparent to the British throne, will become Queen Consort.

The Queen died on Thursday, September 8, 2022, making Charles the new King of the United Kingdom.

But who is Camilla?

Born Rosemary Shand on July 17, 2022, Camilla was raised in East Sussex and South Kensington in England.

She received education in England, Switzerland, and France. She married British Army officer Andrew Parker Bowles whom she divorced in 1995 after having two children together.

On the other hand, Prince Charles and Princess Diana of Wales married in 1981. Their marriage however controversially ended in 1996 due to incompatibility and extramarital affairs.

Camilla and Charles were romantically involved periodically both before and during each of their first marriages.

Their relationship was highly publicised in the media and attracted worldwide scrutiny. Camilla was largely blamed by many for destroying Charles’ marriage with Diana.

Following their respective divorce from their first marriages, Camilla and Charles married in 2005.

With the controversy surrounding their marriage, Camilla adopted her husband’s other title and became the Duchess of Cornwall following her marriage to Charles.

In 2005, Clarence House, the residence of the Prince of Wales, announced that Camilla would use the title The Princess Consort when Charles accedes to the throne.

However, the Queen’s statement earlier in 2022 put to rest the future of Camilla when he husband assumes the throne. The Queen affirmed that Camilla will be Queen Consort and not Princess Consort as originally planned.

“And when, in the fullness of time, my son Charles becomes King, I know you will give him and his wife Camilla the same support that you have given me; and it is my sincere wish that, when that time comes, Camilla will be known as Queen Consort as she continues her own loyal service,” Queen Elizabeth II stated in February.

According to the Royal Family’s website, Consorts do not hold any formal positions in the government, nor do they see state papers or hold official audiences. The consort’s role is “primarily to provide companionship and moral and practical support to the Monarch”.

The royal family’s website notes that since her marriage to King Charles, Queen Consort Camilla has become the president of more than 90 charities, covering issues like health, promoting literacy, the arts, animal welfare, and supporting the survivors of rape and sexual assault.

Tags about ALL Camilla CHARLES Consort king OF QUEEN THE WIFE