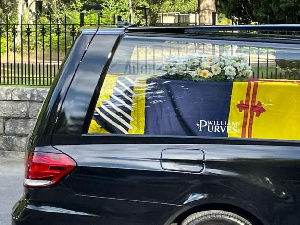 Queen Elizabeth II begins her final journey. Her coffin has left the Balmoral Castle for the Scottish capital Edinburgh.

The coffin of the UK’s longest-serving monarch is being taken by road on a six-hour journey.

The coffin arrived in London, Tuesday.

The Queen died at Balmoral, Thursday, aged 96, after reigning for 70 years.

“We mourn profoundly the passing of a cherished sovereign and a much-loved mother.

“I know her loss will be deeply felt throughout the country, the realms and the Commonwealth, and by countless people around the world,” said her son, King Charles III.

The BBC reports that the Queen will lie in state at Westminster Hall from Wednesday.

Watch the ceremony below.

Previous Ginger: Effective against nausea, menstrual pain, indigestion and breast cancer
Next All about the wife of King Charles – Queen Consort Camilla