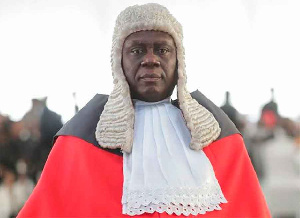 • Meanwhile the allegations are still under investigation

The chief of Efutu and Gomoa Adjumako traditional area, who has made some bribery allegations against Chief Justice Kwasi Anin-Yeboah and Lawyer Akoto Ampaw had made attempts to take the Chief Justice off his case.

This is according to information provided by myjoyonline.com.

This follows claims by his former attorney – Kwasi Afrifa of O&A Legal Consult that Ogyeedom Obrani Kwesi Atta IV who was his client, once told him that the CJ had demanded a bribe of US$5,000,000 to influence the outcome of a case between him and Ghana Telecom.

The High Court in Swedru in the Central Region granted Ogyeedom IV a $16millon judgement debt against then Ghana Telecommunication Co. Ltd.

The chief secured this after the court concluded that the Lands Commission had mistakenly given out some disputed land to Ghana Telecom (now Vodafone Ghana Ltd.) under the belief that it was a state land which had been acquired by Executive Instrument.

Vodafone Ghana proceeded to the Supreme Court after it failed to appeal the case at the Court of Appeal and during this period, the company claimed to have in its possession some documents including receipts that confirmed they were the rightful owners of the land.

Among the documents was a receipt that indicated that the land was acquired by (E.I. 86) and monies were duly paid to one Nana Obranu Gura II who was Ogyeedom’s predecessor, by government.

Whilst Ogyeedom was granted a request by the Apex Court to adduce evidence after claiming the documents had been forged, Vodafone Ghana also applied for leave to adduce fresh evidence at the Supreme Court and for stay of execution pending its outcome.

Appeal for removal of judges on the case:

According to myjoyonline, Ogyeedom petitioned the Chief Justice in September 2020 for the CJ and Justice Jones Dotse to recuse themselves from the case, citing a possible unfair hearing as his reason.

He among other things alleged that the CJ had questioned the cost of the said ‘village land’ in the open court. He also asked why the panel of 5 members on the case had been increased to 7, noting that the stay of execution application which was granted Vodafone by the court wouldn’t have been so if the panel remained 5.

“We have found the suppression of vital evidence of the third defendants herein not only in this case but also in an unreported case dated 28th April 202, entitled Ogyeedom Obranu Kwesi Atta VI vs Ghana Telecommunication Company Ltd vs Another, where we had to deal with issues of suppression of vital and material evidence by officials of the third defendant which if available would have put the evidence before the court for adjudication”.

“…this assertion of Justice Doste clearly meant that even before the substantive matter is heard, a decision had already been reached in favour of the appellant (Vodafone) that there had been suppression of evidence,” he is said to have stated, according to myjoyonline.

This petition was contested in October 2020 by Justice Dotse who explained that the decision on the increase from 5 to 7 was premised on realization that the points of substance raised for determination might require the court to depart from previous binding reasons. He further described it as a request which was solely intended to influence the panel of judges to be on the case and also denied having recalled the Chief Justice making a comment about the cost of the ‘village land’.

Justice Dotse further insisted the quotation attributed to him was misconstrued, maintaining that the comments emphasized the fact that the evidence will have to be put before the court for adjudication.

Document for enhanced panel of justices:

A January 2020 memo to the Chief Justice sighted by myjoyonlline read in portion;

“… anticipating that the resolution of this issue in the ruling might necessitate a departure from settled authorities of the Court, we respectfully crave your indulgence to enhance the panel to seven to enable us to re-hear the matter….”

The CJ headed the increased 7-member panel who granted the order of stay of execution of Ogyeedom’s entire judgment.

The 7-member panel also made an order that Ogyeedom should refund the part payment of the judgment debt of some $4 million that he had already received from Vodafone, to the court. It also granted subsequently, Vodafone’s application for fresh evidence to be adduced.

Ogyeedom also applied to the Supreme Court for leave to lead fresh evidence to contradict the fresh evidence that Vodafone had been granted leave to adduce. This was to help him prove his claims that the signatures of his predecessor in title on the said ownership documents from Vodafone; Nana Obranu Gura II had been forged.

The Court granted the application in favour of Ogyeedom by a majority of four to one, with the Chief Justice, Kwesi Anin Yeboah, being the only one with the view that it was wrong to give Ogyeedom an opportunity to remake his case.

Previous LGBTQ+ bill: There are more pressing issues in Ghana that needs attention – Kofi Mole to MPs
Next Forest guard shot by illegal logger at Antronie