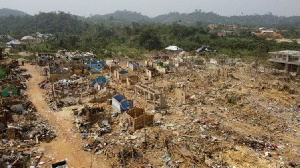 Apiate Committee doesn’t have money, our accounts are empty – PRO

The Public Relations Officer (PRO) of the Apiate Disaster Committee, Thywill Quarshie, has revealed the committee has terminated the contract that provides transportation of school children in the Apiate community due to lack of funds.

He explained that the committee will no longer support school children’s transportation and also some medical bills of individuals who fall ill at the camp as the committee no longer has money to run the affairs of the people.

“We pay GH¢10,000 every month to the Ghana Private Road Transport Union before these children can be transported to school. The committee doesn’t have money again, our accounts are empty and as such, we cannot continue to pay such an amount every month. We have terminated the contract effective 31 May 2022.

“Before the disaster, they had means of going to school so now that we have run out of funds, we are cutting down cost and as such, they will have to find a way of going to school. Almost all their expenses in the camp including medical bills are on the committee, and we are using the same funds to take care of them. So now we will not take care of anyone who falls sick at the camp again. We will only take care of people who are ill as a result of the explosion. We are now living by plans,” 3news.com quoted Thywil Quarshie

Over five hundred people were rendered homeless at Apiate, a community near Bogoso in the Prestea Huni Valley Municipality in an explosion, killing about seventeen people and leaving several others severely injured.

The explosion was caused by a truck belonging to a mining service contractor MAXAM that was involved in a collision causing an explosion in the community.

Based on this, an Appiatse Support Fund was established by government to support the community.

The Appiatse Support Fund Committee which is headed by Dr. Joyce Aryee explained that the funds raised will be specifically used to rebuild the Appiatse community into a Modern Green City and also to provide a source of livelihood for the indigenes of the Community.