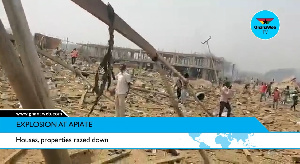 One more person who was a victim of the Appiate explosion has passed on bringing the total number of deaths to 15.

Ama Nsowaa 59 was one of the hard-hit victims of the January 20 explosion. She battled a left leg injury till 29th August when that leg was amputated at the Komfo Anokye Teaching Hospital.

Speaking to the Public Relations Officer of the Appiatse Disaster Relief Committee, Thywill Quarshie told Ghanaweb that, the deceased, who was diabetic was going for review at the Wassa Akropong Government Hospital, but was referred to Komfo Anokye Teaching Hospital for further treatment, where the leg was amputated on Monday August 29, 2022.

He said “we were of high hopes that all will be well with her after the amputation only to be hit with the news of her departure on Tuesday evening”.

“What is so devasting is that the daughter of the deceased also lost her husband during the explosion, and so the mother (Ama Nsowaa) was her only hope, and now she is gone” he added.

Another victim, Paul Asare 38 who had his belly opened by the explosion also died at the Komfo Anokye Teaching Hospital in Kumasi on Monday, June 6, 2022.

According to family members, he fell unconscious after he complained of stomach upset and was rushed to KATH for medical attention where he died.

Thywill Quashie on behalf of the relief committee expressed his condolences to the bereaved families.

According to Thywill Quarshie “six more people are in critical conditions that need urgent attention. One of such victims; John Christmas Opare had his spinal cord broken, paralyzing him. He had to sleep on his back for many months which made his buttocks develop “pilonidal cyst”; a medical term to describe a big sore buttocks”.

“He had to change his sleeping position to his side and that has also developed a sore at one of his hips up to the bone level.

He has been rushed to the Cape Coast Teaching Hospital on Monday September 5, 2022, where doctors say he needs six pints of blood for survival” he explained.

He called for more support; cash or kind from companies, groups, organisations and individuals to help take care of the people.

13 people were confirmed dead in the Appiatse explosion on January 20, 2022 rendering over 500 people homeless after a truck carrying explosives belonging to MAXAM Ghana exploded after it was involved in an accident at Appiate, near Bogoso. The whole community was razed down as a result of the explosion.