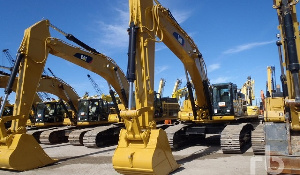 The Police through days of intelligence operations yesterday 6th September 2022 retrieved one of the excavators that was reported missing from Ellembelle in the Western Region.

A team of operations and intelligence officers working day and night discovered the missing excavator several kilometers into a forest within the Ellembelle District.

While the team of police officers was escorting the excavator to Takoradi, at the Axim Junction, the DCE of Ellembelle, Mr. Kwasi Bonzo organised and led some thugs to attack the police and obstructed the operation.

The DCE and three others were therefore arrested accordingly.

Earlier reports suggested that the excavators were in the possession of the police when they went missing.

But the Western Regional Police Command refuted the claim indicating that the excavators were not in their possession.

“We wish to categorically state that no excavators were handed over to the police by the District Chief Executive (DCE) of Ellembelle, Mr. Kwasi Bonzo or any other person from the assembly,” their statement said.